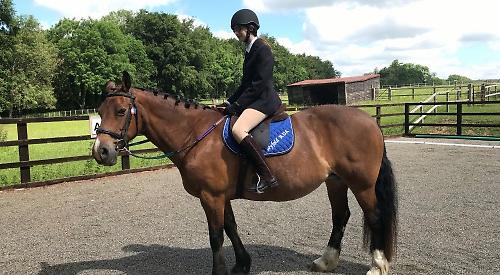 THREE teenagers from Wyfold Riding for the Disabled took part in a virtual equestrian competition.

Etholle Wren, Katherine Blande and August Buchan were among dozens of youngsters who competed at the Riding for the Disabled’s national championships.

The event had to be held virtually for a second year in a row due to the coronavirus pandemic so the young riders had to film their entries for the dressage section of the competition instead.

Each girl had to memorise a course and complete activities such as getting their horse to halt, sit, trot or walk in circles. Etholle, known as Ettie, 15, and August, 15, rode a pony called Lulu and Katherine, 13, rode a pony called Pluto. The girls were filmed at the charity’s base at Wyfold but unfortunately they didn’t progress in the competition.

Both Ettie and August qualified in 2019 and then competed at the championships held at Hartpury College in Gloucestershire.

Gill Rushworth, fundraising
co-ordinator for Wyfold RDA, said: “It’s really quite difficult as they need to remember each part of the course and carry out each instruction at each point.”

She said that with more training the young riders could compete again and qualify next year when hopefully the championships would be held normally.

Mrs Rushworth said: “It was a wonderful experience and a great challenge for Ettie and August and we are very proud that they reached the qualifying standard, which is a major achievement.

“Katherine, who has not been riding for as long as the other two, is another star in the making so we have high hopes for them all the future.

“Many thanks go to Henley Rotary Club which generously sponsored the pony transport.”

The charity needs another volunteer instructor to help train the girls on Saturday mornings. For more information, call the charity on (01491) 680541 or
email info@wyfoldrda.org.uk