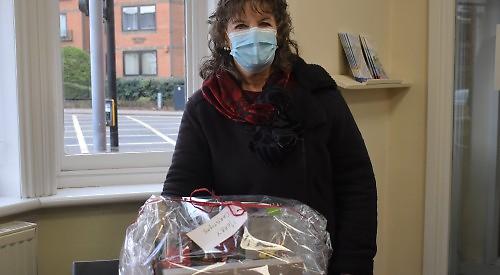 A WINNER of the Henley Standard’s Christmas hamper competition said she was thrilled.

Beryl Rush, from Wallingford, won a Tesco hamper worth £100 when her name was selected at random after she correctly answered that nine reindeer pull Santa’s sleigh.

Mrs Rush, who spent Christmas with her son Simon and her daughter-in-law Angela, said: “I’m absolutely thrilled. I didn’t expect to win — I called my son straight away and told him not to buy anything as I had all these goodies.

“I’ve entered competitions in the Henley Standard before and I’ve won a voucher for a Brakspear pub and another time I won a beauty treatment in Henley.

“People used to laugh at me because if there was a competition I would always enter it.

“I read the Henley Standard every week — there’s so much in it and it’s so interesting.”

She said: “I’ve never won a competition before so I was very surprised to win this one.”

The winners of the hamper competition published in the Henley Standard on December 17 were Hilary Fisher, of Queen Street, Henley, and Maurice Hicks, of The Ridings, Emmer Green.

Their names were selected at random after they correctly answered that the chocolate reindeer in the Waitrose hamper was made by Lindt.