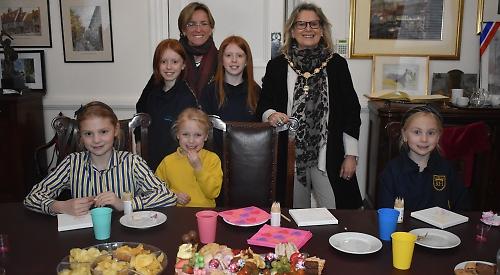 THE winner of the Mayor of Henley’s Christmas card competition was treated to a tea party at the town hall.

Alice Vernon, eight, and her sisters, Charlotte, six, and Lucy, four, joined Sarah Miller in the Mayor’s parlour with Mayoress Carolyn Ahara and their two twins, Ruby and Vivian, 10.

A platter of treats was served, including cakes, crisps, sweets and biscuits, provided by party planners Atticus and Hope, of Marmion Road, Henley.

The Vernon girls were given a small canvas and crayons to start working on their Christmas card entries for next year.

Alice, a pupil at Rupert House School, won the competition with her watercolour of St Mary’s Church, which was chosen from about 200 entries from children at the town’s primary schools.

It featured an angel on top of the spire, a Christmas star and Mary riding a donkey as well as people in hats playing snowballs in the street.

The design was featured on the front of the Mayor’s official Christmas card, which was printed by Higgs Group, publishers of the Henley Standard. Alice was invited to turn on the lights at the Christmas festival.

Councillor Miller said: “It’s great to see Alice again. I’m delighted that restrictions have been lifted so that she and her sisters could join us for tea.”