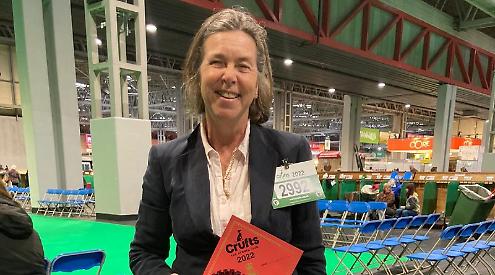 A PUPPY who competed at this year’s Crufts was literally in a class of her own.

Hungarian pumi Jolly, who is 10 months old, was making her debut at the show in Birmingham and won without any opposition.

This was the first time Crufts has introduced standalone classes for pumis and a total of 31 were entered in separate classes based on their age.

Owner Amanda Wood, a retired teacher from Brightwell Baldwin, said: “The thing about pumis is that they are really rare.

“There are hardly any of them, so it is not like when you go up against lots of Labradors when there are hundreds of them.

“Jolly may have been the only one in her class but she still had to be good enough to be awarded a rosette, so I was really pleased.”

Mrs Wood, who had only been to Crufts as a spectator previously, was keen to show Jolly in order to promote the breed.

“There are classes for puppy, junior and post-graduate, which is for those who are older and have been shown and won before.

“The winners of each class then go up against each other for best of breed.

“After she was named best in class, Jolly went up against all the other bitches but she wasn’t in the top two.”

Mrs Wood, who bought Jolly from a breeder in Hereford, admitted she had been more apprehensive at the show than her dog.

She said: “I have been to Crufts as a spectator but it was the first time I was on the other side and I was really nervous but Jolly wasn’t bothered.

“When you get there, there are benches and each dog has its own cubicle where it can have the bed for the day but she wasn’t that bothered. We got there early and we wandered around for her to get used to the atmosphere and we met lots of other pumis, including her mother and auntie, and they were all very friendly.

“Jolly had a good sleep after lunch and we were shown at about 3.45pm when we walked round the ring so the judge could view them all.

“The judges always look at the dog in front of them and compare it to the standard for the breed, so that they should be this tall or thin or long and heads should be like this or that.

“But with Jolly being the only one in the class it was hard to know how she compared. The judge said she was very nice, a good bitch.

“I heard him dictating because they have to make notes and he said she was a little bit overwhelmed but with a bit more experience she would do well.”

Mrs Wood was accompanied to the show by her niece Georgia and they all enjoyed the experience.

She said: “My niece had taken the day off to be with us and was very supportive.

“We had lots of people come up and ask what breed Jolly was.

“As Jolly won her class she has qualified for Crufts next year but she won’t be a puppy any more so she will be in a different class.

“I would never do it again if she didn’t have a nice day but she did and it was important that we did try to compete for the breed.

“Afterwards, we got straight in the car where she had a big sleep and later had a big supper.

“Jolly loves to be outdoors and is always busy so her name suits her perfectly.”

The pumi was developed in the 17th and 18th centuries by crossing herding dogs with terriers and German spitz and was used for gathering, driving and keeping livestock under control.

In Hungary, they are still used as herding dogs but their lively temperament and distinctive curly hair are gaining them growing popularity as pets.