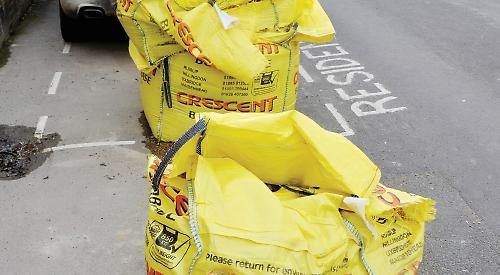 RESIDENTS of a Henley cul-de-sac say they’re struggling to find room to park because of workmen and their vehicles.

Parking used to be allowed on only one side of Albert Road until last year when 10 extra bays were created on the other side by using part of the pavement.

This was designed to ease the problem of parking in the street, off Greys Road, which is covered by a residents’ parking scheme.

But now residents on both sides of the terraced street say the problem has been made worse by contractors carrying out renovation work at a number of houses.

They say builders leave their vans outside people’s doors or in the turning circle at the end of the street, which is supposed to be kept clear. This means drivers have to reverse all the way down the street to get out.

Some workmen also reserve a space by leaving cones or bags of building material overnight. The contractors are allowed to park in the street if they have a visitor’s permit but residents say many don’t bother to get one.

Dennis Eltze, who has lived in Albert Road for more than a decade, said: “They do all sorts of horrible things and park without consideration.

“There’s a van outside my house right now that doesn’t need to be there. It’s close to my front window because the pavement’s so narrow so it blocks my sunlight.

“They should park for a few minutes to leave their tools, then drive off and park in the car parks off Greys Road or Goodall Close.”

Mr Eltze said the police and parking wardens responsible for enforcing residents’ parking did issue offenders with penalty notices but this seemed to make no difference.

He said: “There’s been a slight improvement since the new bays went in but I’m not sure that penalising people makes them more considerate. I don’t know what the answer is.” Claudia Jackson-Bailey, who lives a few doors away, said: “It’s a nightmare, particularly when contractors park at the end and make it unsafe to turn around.

“We want to be reasonable but some contractors don’t have visitor permits and even claim spaces by coning them off, which is ridiculous.

“There’s not enough space here and it would make sense to create a few more parking bays nearer the junction with Greys Road.

“Residents are having to park in the district council’s car parks and then get fined for overstaying.”

Katherine Irving, another resident, said: “Parking has improved substantially since the new spaces were marked out but there still aren’t enough and that’s been exacerbated by contractors carrying out improvement works.

“They could easily use the car parks round the corner, then residents wouldn’t have to park on double yellow lines and get tickets. There’s a fair bit of give and take among neighbours but that irritates us.” Warren Dickason, who also lives in the street, said: “Parking here is a nightmare and always has been. Most of the neighbours here just live with it.

“At 4pm on a Friday night, it’s guaranteed that you won’t get a space. I sometimes park on the double yellow lines and move first thing in the morning. We all do because there’s no alternative.”

David Nimmo Smith, a Henley town councillor and the Oxfordshire county councillor responsible for roads, said he would ask the two wardens responsible for enforcing residents-only parking in Henley to visit Albert Road more often and fine any drivers in breach of the rules.

He said: “You have to be pragmatic and accept that building work needs to be done but people should stay within the regulations.

“I’m very sorry that this is happening and will make sure something is done.”