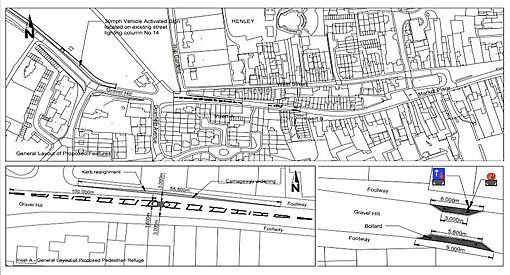 RESIDENTS have complained that they were not consulted about plans for traffic-calming measures in a busy Henley street due to an “oversight”.

The town council is considering three possible schemes for a section of Gravel Hill and wants to know what householders think.

The first proposal is for a “pinch point” with build-outs on either side of the road to make it safer for pedestrians to cross, which would cost £12,000.

The second is for a pedestrian refuge in the middle of the road, which would cost £9,000, and the third is for a £7,000 vehicle-activated electronic speed sign.

Residents of Gravel Hill were consulted but many in nearby streets including West Street, Hop Gardens and Paradise Road weren’t.

People living in West Street are particularly concerned as they fear a pinch-point would displace traffic down their normally quiet road.

Viv Greenwood, who lives in the street, raised the issue at a meeting of the council’s traffic advisory committee.

Neighbour Isabelle Kiddy said: “I live in West Street and not Gravel Hill but it is important that whatever is done to one community does not adversely affect another.”

Councillor David Nimmo Smith, who chaired the meeting, apologised but said: “It was not a formal consultation. It was an informal consultation to see whether it was worth pursuing. West Street was meant to be done but there was an oversight.”

Catherine Mattingly, of King James Way, welcomed the move, saying she walked her children to Badgemore Primary School and found it difficult to cross Gravel Hill. She said: “Why would anyone be opposed to slowing the traffic down there? What on earth is the opposition?

“My children and I can wait three to four minutes while people whizz past because they are going so fast. We don’t feel safe crossing.”

Ron White, of Milton Close, said: “I don’t live on Gravel Hill but I use it daily. There are two hazards. One, the pavement outside the [former] Basketmakers Arms and the other the speed of traffic.

“Something needs to be done to control the speed of traffic but any solution must be amenable to West Street, Gravel Hill and people like me who use Gravel Hill. It has to be amenable to all of us and increase rather than decrease the quality of life.”

Susan Edwards, also of Milton Close, said: “This is about improving safety for pedestrians but what affects one area should not have a detrimental knock-on effect on other areas.

“Can I urge the committee to continue with their progress in installing a pinch-point because it is only a matter of time before someone gets under the wheels of passing cars? It is very narrow there.”

Ian Clarke, of Cromwell Road, suggested installing a roundabout and pedestrian crossing to solve the problem of speeding traffic, which he said was “absolutely terrible”.

Cllr Nimmo Smith said: “The town council, through this committee, has considered Gravel Hill and is looking at ways of slowing down traffic to make it safer for pedestrians.

“You can argue that we are not doing it very well but we are doing something.

“I would like to redo the informal consultation and in that letter it should have the date of the next meeting.

“No decision has been made, nor will be made until we have got to the bottom of what we are trying to achieve. It is not an easy issue, it’s a conundrum — how do we achieve what we want without impacting anybody adversely?”