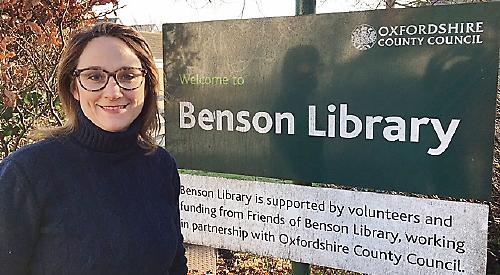 A WOMAN bidding to represent Benson on Oxfordshire County Council says she supports a bypass for the village.

Conservative Caroline Newton, 48, from Britwell Salome, resigned from her Watlington and Chalgrove seat in February 2014 as she was moving to Milan.

She returned to Britain last summer and is now seeking election in the Benson and Cholsey ward in the county council elections on Thursday, May 4.

Benson is facing the prospect of almost 1,100 new homes with planning applications which have already been approved or are pending, while its draft neighbourhood plan has allocated sites for about 365 properties.

Mrs Newton, a mother of two, said she wanted the “edge street” built from the A4074 to the B4009 to help alleviate traffic, particularly if the Government’s proposals for 3,000 homes on Chalgrove Airfield are approved.

She said: “I go through Benson most mornings before rush hour when the traffic is beginning to build and I think if you’re going to have all those extra houses you’re going to need that edge street.”

She said there would also be “little option” other than to expand Benson Primary School with the extra demand on places caused by so many new homes but she was concerned about plans to relocate the school’s playing field to the other side of Littleworth Road.

Mrs Newton, who was first elected to the county council in a by-election in April 2012, said her priorities were conservation and improving the delivery of services.

She said she welcomed the county council’s plans to combine all Oxfordshire’s councils into a unitary authority, which are supported by South Oxfordshire District Council but not by some of the other districts.

“It’s about being involved in one’s community and making it work better,” she said.

“It doesn’t mean no housebuilding but it’s how we mitigate the potential damage that has on this area. I’m interested in how we can get the infrastructure in place to support these residents, not just road building but schooling and drainage issues, and the wider impact all these will have on the environment.”

Mrs Newton left for Italy after her husband Matthew was offered a job in communications with an Italian insurance company.

She explained: “We decided that it was a good thing for the family to do so I had to resign my seat, very sadly. We did that for two-and-a-half years until I decided it was time to bring the family back.

“It was because of sick and ageing parents, schooling and knowing the county council elections were coming up — I wanted to stand again, weird as that sounds. I only did two years before but I felt I was on the verge of finding my feet.

“I feel very passionately about local politics and local politics needs keen, enthusiastic, smart people to get involved so we can try to make the areas we love work.

“There is a lot of great people on the council but there’s a tendency towards having older people. I think you need younger people.”

The incumbent is Mark Gray, who sits as an Independent councillor, and is also chairman of Cholsey Parish Council. He was elected in 2013 when he received 46 per cent of the vote to defeat Peter Skolar into second place.

“Actually being able to step back and say, ‘what is important for the strategic interests of this area and the county?’ is important.”

Cllr Gray, who lives in Cholsey, said: “I’m not just in favour of a bypass but it was partly my suggestion last year that this was the way to go.

“Caroline can be as much in favour of it as she likes but it’s the village’s project, supported over the past year or so by me.

“I live in the patch and I think it’s really important that the councillor lives where they do their work.”

Cllr Gray said he was confident the bypass would be built if it was negotiated with the developers.

He said it wouldn’t affect the shops in Benson because they relied mainly on trade from the village.