Garage owner doesn't want to be replaced by housing 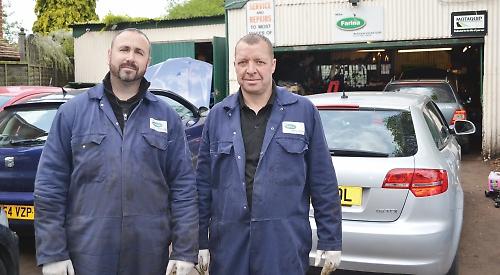 THE owner of a garage in Sonning Common fears he will be forced to look for new premises and make way for housing.

Gary Catt has owned the Mike Farina Garage in Sedgewell Road for five years since he bought it off the founder and wants to stay put but says the landowner is planning to sell the site for redevelopment.

His lease runs out in December, so he is appealing for help in trying to find new premises in the village in case.

The garage has been in Sedgewell Road since 1981 and 40-year-old Mr Catt has worked there since he was 16 and living at home with his parents, Lionel and Ronnie, in Orchard Avenue.

He said his father, a builder, encouraged him to ask Mr Farina for work experience at the garage.

“I did my youth training schemes here and never left,” said Mr Catt. “When Mike decided he was going to retire he wanted me to take it on because I’m from the village and was well known as his mechanic.

“Mike also wanted the garage to carry on serving the village. I kept the name because it was a well-established business.

“It has always been used for the motor industry and there used to be petrol pumps on the site.

“The house next door used to be a pub and this building was used to repair carriages. It’s been here for a very, very long time.”

Mr Catt would like to buy the site and rebuild the garage rather than relocate.

He said: “The garage has been here for so many years and it is my belief that it needs to stay here. It’s a village garage and needs to be here to serve the public.

“I’m not going to give up without a fight because we’ve worked far too hard on the business.

“We have the backing of the people here and they seem to want to help.

“The building is in a poor state of repair and we have proposed building a new garage. We need more space because in the last few years we have starting doing a lot more things, such as tyres and minor brake work.

“This would be expanding the business with a new building and using some of the land at the back of the site. Everyone knows our location but we have to keep up with the times.”

Mr Catt, a former pupil of Chiltern Edge School, said there should be a balance between village amenities and new housing.

“People want to live here as it’s a nice village but without a garage it would be lacking an amenity,” he said. “The village can’t cope with more people unless you offer amenities.

“I understand some people might not want to see a garage like this in their neighbourhood because they think it’s a bit old school but recently people have moved into this road despite having a garage next door so they’re clearly comfortable with it.

“The feeling we’re getting from customers and neighbours is that it would be horrific for an established business being lost to more housing.”

Mr Catt said he had spoken with parish councillors about space for businesses in the village but was told there was none available. “They told me there are plans for housing in the village but nothing set aside for something like this,” he said.

“They said if we found somewhere they would support us.

“I think the village needs to keep amenities like this. Not everyone wants or can afford to go to a main dealer.”

Mr Catt said he had customers from Emmer Green, Caversham, Nettlebed and Henley as well as Sonning Common.

“There are garages in those areas but once you get on first name terms with people they know who you are,” he said.

“It’s a trust system where people are handing over their pride and joy in some cases. They trust you to look after it.

“It would be fantastic if anyone with appropriate land could get in touch. We looked at Manor Farm in Peppard but there are already three garages there.

“We need to be in the village like we have been since 1981. We want to offer more to the village.”