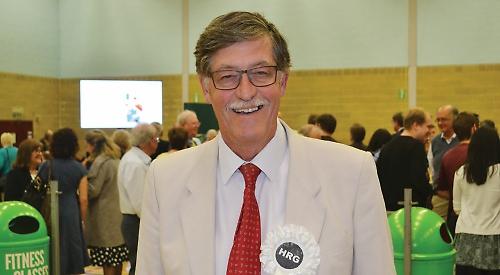 CONSERVATIVE David Nimmo Smith said he was “deeply disappointed” at losing the Henley seat on Oxfordshire County Council after 12 years.

He was defeated by Stefan Gawrysiak, of Henley Residents’ Group, who will now represent the town on the Tory-controlled council.

His defeat means the Conservatives fell one seat short of an overall majority on the council with 31 of the 63 seats.

Meanwhile, Councillor Gawrysiak, a former mayor of Henley, is now a member of the town, county and district councils.

Liberal Democrat David Thomas was third with 250 votes followed by Labour’s Jackie Walker with 166, and the Green Party’s Elisabeth Geake with 133. The turnout was 29 per cent.

The results were announced at the count at White Horse leisure centre in Abingdon on Friday following the elections the previous day.

Cllr Nimmo Smith was accompanied by his wife Judith, a former district councillor, and supported by party colleagues including Dieter Hinke, the chairman of Henley Conservatives, and Henley MP John Howell.

He smiled and applauded as Cllr Gawrysiak was announced as the winner by returning officer Peter Clark.

Speaking afterwards, he said: “I’m deeply disappointed. I’ve worked my socks off for Henley for 12 years and I’m disappointed that the electorate didn’t think I was able to deliver.”

He added: “I did greatly enjoy it and I’ll look back with satisfaction that I achieved a lot over the 12 years on the county council and, more importantly, my four years as a cabinet member. I was actually trying to do things across the county in that role.”

He cited as one of his achievements the £4.5million scheme to resurface a 1.1-mile stretch of the A4130 between Bix and Fair Mile at the junction of the B480 to Lower Assendon in 2014.

Cllr Nimmo Smith also said he had been working on a town-wide 20mph speed limit for Henley and a night-time ban on HGVs and hoped these would be progressed by his successor.

“We fought a long, honourable campaign for the town and county council seats and I’m really pleased that the residents of Henley have put their trust in me.

“I think this shows that the residents trust HRG to get things done.

“David has held the seat for a long time but there was always a chance of HRG of getting a result.

“I’m going to enjoy the moment then I will come out with a plan very shortly.”

The Conservatives won the other seats in the Henley Standard’s circulation area with the exception of Benson and Cholsey division, where Independent Mark Gray was re-elected.

Cllr Gray, who lives in Cholsey, where he chairs the parish council, was delighted. He said: “I knew I had worked hard and that’s all you can do — work for your constituency.

“I’m really pleased to have been involved with things like what we’ve been able to do with the children’s centres.”

He said one of his priorities now would be Benson, which is facing the prospect of almost 1,100 new homes with planning applications which have already been approved or are pending.

“We have got to get a bypass sorted,” said Cllr Gray. “I think there’s a lot of work to be done there. It’s not just going to fall into our laps.” Mrs Newton, from Britwell Salome, was attempting to make a return to the council after a break of more than three years.

She won a by-election in the Watlington and Chalgrove seat in April 2012 but resigned in February 2014 as she was moving to Milan. She returned to Britain last summer.

Mrs Newton said: “It was always going to be tough for us because there’s such a strong local incumbent who is incredibly well-known in one of the villages.

“We doubled our vote but the turnout increased and he won quite convincingly.

“It’s disappointing because you don’t go into an election with any other intention but to win. You never really want to lose but I’m pleased that we got more than 1,000 votes.”

Councillor Harrod said: “I’m obviously pleased and I’m looking forward to continuing to represent the residents of the division as best I can. I’m going to continue to campaign against overdevelopment in the area, particularly proposals like that at Chalgrove airfield.

“I would also be very pleased to carry on my cabinet role and looking after schools as I have done for the past few months.”

Mrs Cooper added: “I’m disappointed but the result wasn’t unexpected. I tried and put up a very good fight. Steve is an attentive county councillor and much better than a lot of others.

“The big issue is housing in Chalgrove and I hope Steve persuades his colleagues what a stupid idea that is.”

In the Goring division, Conservative Kevin Bulmer was re-elected with 58 per cent of the vote.

Cllr Bulmer said: “I’m pleased with that. It’s a very good result and a good turnout for a county election.”

Mrs Coyle said: “We were really pleased with the result because we have limited resources and largely concentrated on other seats.

“It showed there’s a lot of support for the party in spite of that.”

Mrs Coyle will also stand for the Lib-Dems in Henley at the general election on June 8 and said Friday’s result gave her confidence.

She said the Lib-Dems had won the second highest number of votes in the constituency with just over 21 per cent.

“It makes me feel very positive. In the county as a whole we won two seats from the Conservatives. We are very pleased with that and it gives us a good platform,” she said.

Mr Bowen, a Whitchurch parish councillor, said: “For me, it’s a good result. I’ve doubled what it was before and put a bit of pressure on my opponents in a Tory stronghold.”

He gained 1,930 votes ahead of Liberal Democrat Lucio Fumi with 442 votes and Labour’s Veronica Treacher with 363. The turnout was 36 per cent.

Cllr Bartholomew said: “I’m very pleased to be re-elected. Thank you to all the people who supported me and I’m looking forward to another four years of representing the parishes.”

He pledged to work with staff and parents at Chiltern Edge School in Sonning Common, which is at risk of closure after being rated “inadequate” by Ofsted and put into special measures.

Cllr Bartholomew said: “I will be looking closely at the situation to see if we can get academy status.”

Across the county, the Conservatives won 31 seats, with Labour and the Liberal Democrats getting 14 and 13 respectively. The remaining five seats were taken by independents.