I was denied May fayre stall, says shopkeeper 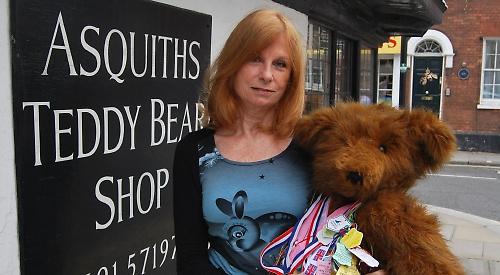 A SHOPKEEPER has claimed she was denied a stall at the Henley May fayre.

Joan Bland, who owns the teddy bear shop Asquiths in New Street, offered her services as a “teddyatrician” at the event held in Market Place on May Day but says the organisers didn’t take up her on it.

She used to run a stall at the fayre, giving advice to people about how to look after their bears, when it was held in Mill Meadows and wanted to take part again with its move back to the town centre this year.

Ms Bland, a Conservative member of South Oxfordshire District Council, said she had approached the town hall to request a pitch but said no one got back to her.

She blamed fayre organiser and town councillor Sarah Miller, a member of the Henley Residents’ Group.

She told a town council meeting: “When the fayre was held in the square before I was a teddyatrician there and raised money for Sue Ryder.

“I offered my services to improve the health of teddy bears. I asked to speak to her [Cllr Miller] at the town hall and she wasn’t there. I then spoke to the administrator who said she would be delighted that I attend.

“Everybody was very, very pleased that the teddyatrician would be back. Why wouldn’t Councillor Miller find any space for me when there was a lot of space left?”

Cllr Miller said the request was made too late as there was a cut-off point for applications for pitches.

She said: “This wasn’t a town council event, this was an event put on by a working group.

“Everybody who wanted to take a stand was told to come to me. It was published in the Henley Standard and it was tweeted constantly. This was not a political move — I would have loved to have your teddyatrician there.”

l Last week, the Henley Standard revealed how Mrs Bland had been billed £300 by the town council for organising a display of electric cars in Market Place to help tackle the town’s air pollution problem.