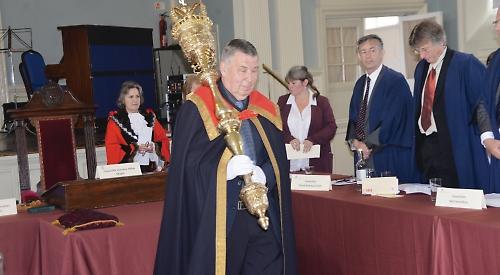 AS Henley’s town sergeant, Cliff Austin is used to seeing the comings and goings of politicians.

But it was his turn to say goodbye on Friday when he retired after 17 years working for the town council.

He was given a party in the Mayor’s parlour at the town hall, which was attended by councillors, colleagues and friends,

Mr Austin, 64, who lives in Deanfield Avenue, Henley, said he would miss all the people he had come to know through work but it was time for him to take it easier.

His face is well-known in Henley as he has always been present at civic events such as mayor-making, often in his ceremonial robes and carrying the mace.

However, his day-to-day job was far more down to earth, ensuring the smooth running of the council’s operations, including cleaning, maintenance and preparing for functions.

He would typically start his day at 8am but then go home for a few hours and return in the afternoon or in the evening to open the town hall for events such as council meetings.

Speaking just before his retirement, Mr Austin said: “I don’t really have a job description — I have done just about everything over the past 17 years.

“I make sure that everything is clean and look after the general running of the buildings, the town hall, the day centre, King’s Arms Barn and the Old Fire Station Gallery.

“My work also depends on what is going on. I make sure that the rooms are ready and that everything that is needed, like tablecloths or a microphone, is ready.

“If there is a late-night event and another the following morning I have to be here at 2am or 3am clearing up for the next day. I’m also always on the end of the phone if anything goes wrong and I do the health and safety and ceremonial stuff.”

Mr Austin was born at Townlands Hospital to Philip, an engineer, and Julie, a housewife, who worked at the former GDS shop in Duke Street, among other jobs.

The family lived in Crocker End, near Nettlebed, but moved to a new bungalow in Greys Road in 1958, when Cliff was five.

He went to Henley Infant School, in the same road, before attending Gillotts School.

He left school when he was 15 and started an apprenticeship at Higgs Group printers, publishers of the Henley Standard, as a compositor.

After five years he joined the merchant navy as a ship’s printer on cruise ships and mail boats, which travelled from Southampton to the coast of South Africa.

Mr Austin was 28 when he married and he and his wife lived in Caversham Park Village and had two sons, Alex and Tom, who are now in their thirties and working.

Later Mr Austin moved back to Henley to the house where he still lives and went to work on the ferries. After 20 years at sea he decided to stay closer to home and spent seven years in outdoor catering.

He decided to change jobs when he saw an advert for a caretaker for the town council.

His application was successful and he went to work at the town hall under the then town clerk Jean Pickett.

Mr Austin recalled: “When I first came here the place was a complete wreck as it was going through refurbishment. It was good for me because I didn’t want to travel to work and the town hall was round the corner from where I lived.”

After about 18 months he was appointed town sergeant, taking over from Stan Cox.

Over the years he has seen a number of television programmes filmed at the town hall, including Flog It! and Midsomer Murders together with a recording of the BBC Radio 4 show Any Questions?

One of his fondest memories is spending time with former Henley MP Boris Johnson and a then little-known Nigel Farage.

“The best laugh was with Boris,” said Mr Austin. “I had to always let him out the back door because the press was always after him.

“I also had Farage here before he was famous. I used to have a smoke with him out the back. This must have been about 13 years ago.”

His most poignant memory is of the civic funeral for former mayor Terry Buckett in 2009.

The council closed town centre roads and the procession went from the town hall to St Mary’s Church with Mr Austin at the front carrying the mace.

He recalled: “It was a sad day but one that stands out. I thought we did a pretty good job. We came back to the town hall for the reception after the ceremony.”

The two men had been in the same class at school and Mr Austin said: “I used to say to Terry, ‘I used to help you with your homework and you ended up being a councillor and mayor’!”

Mr Austin said: “The services have become more established with a great turnout every year with a much more community feel to it.

“It has also been nice working with Brigadier Malcolm Page and Brian Hughes [of the Royal British Legion] as well as members of Henley Lions Club and other groups.

“You get to know a lot of people and the local organisations through this job — a lot of hard work is done by people of the town.”

Mr Austin said, diplomatically, that the town clerks he had worked under had all been “different” in their own ways but he always fondly remembwered Mrs Pickett as she was a “really nice person” and “you knew where you stood with her”.

He said all the mayors he had known worked hard but his favourite was Barry Edwards — “a really nice guy”.

Mr Austin, a Reading FC supporter, is now looking to spend more time playing golf — he has been a member of Henley Golf Club for more than 40 years.