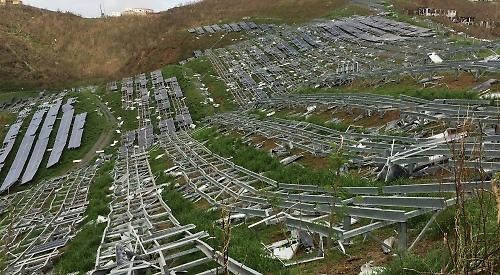 A HENLEY town councillor who is providing aid to those hit by hurricanes in the Caribbean says locals are “getting on with life” after the disaster.

David Nimmo Smith is spending about 10 weeks in the region helping with the aid effort after a number of islands was devastated by hurricanes Irma and Maria this month.

Last week, the Henley Standard reported that Mr Nimmo Smith, an engineer, had travelled to Saint Thomas, one of the US Virgin Islands, and will help in the former pirate refuge of Charlotte Amalie before moving on to more remote communities.

He said there was a shortage of food and power and a night-time curfew was in place to allow roads to be cleared and overhead cables to be repaired. Many telegraph poles were damaged or toppled by the storms, while solar panels in fields were ripped up by 100mph winds.

Mr Nimmo Smith regularly volunteers to assist in aid efforts following natural disasters, and has previously visited St Croix and Grand Bahama after they were hit by hurricanes.

He says the roads in Saint Thomas and Charlotte Amalie have now almost been cleared, while work is ongoing to repair damaged power lines. Food and fuel is still in short supply as Puerto Rico, where the supplies are shipped through, “took a pasting” from the storm.

He said: “Food is gradually coming in — the shortage is fresh fruit and vegetables, which normally come via Puerto Rico. It took a pasting from Maria and scarce resources are going there at present. Fuel is also rationed.”

Mr Nimmo Smith said aid is being provided by countries including the US, who are helping repair social housing in areas which were subjected to flooding and rock slides.

He added: “Electric items on the islands are sensitive to salt-laden atmospheres and, whilst at present seeming OK, are prone to packing in after a few months. The locals are just getting on with life as it returns to normal.”