I've reported every pothole in town that needs fixing 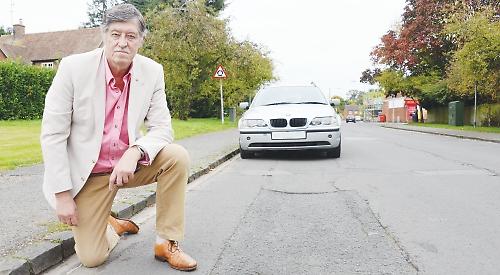 EVERY major pothole in Henley’s roads has been recorded by a councillor.

Stefan Gawrysiak has checked every road in the town to identify defects as well as loose granite sets, overgrown vegetation and drainage problems.

He has posted them on an online map of the town and reported every pothole to Oxfordshire County Council, the highways authority, so they can be scheduled for repair.

Councillor Gawrysiak, who represents Henley on the town and county councils, said: “There is a backlog of repairs and I wanted to be able to show the scale of what we are dealing with.

“I have driven every road in Henley in order to map the problems and get it on the council system otherwise nothing happens.

“The idea is we will get them done over the short- to medium-term.”

He said his survey took him about four hours and he found:

⚫ Loose granite sets in Greys Road, including the junctions with Elizabeth Road and Wootton Road, as well as in Valley Road, Cromwell Road, Mill Lane, Newtown Road and King’s Road.

Cllr Gawrysiak said: “The repairs will all be tackled in different ways. We have to be careful of the money and have to do the repairs that are appropriate for the problem.”

There are four types of repair, including scraping off the surface and then relaying it, which is the most expensive method. This was used recently in Harpsden Road.

Another is to use a new road repair vehicle, known as a “dragon patcher” because it has an articulated arm which shoots out a jet of flame to mend small holes.

The third is to spray tar on the road and put loose chippings over the top, which are bedded in when vehicles are driven over the top.

The fourth is to send out a repair gang to fill in individual craters.

Councillor Gawrysiak said the council would try to co-ordinate the work to get best value for money.

He said: “With Hop Gardens it needs the dragon patcher but then there are the ‘top shops’, the Wootton Road roundabout, Makins Road, Blandy Road, Greys Road and Nicholas Road.

“If we can get the patcher for two days we could get that whole area done.

“I will be advised by the county council engineers as I am not an expert. I have had three or four meetings with the officers and [area steward] Keith Stenning and they have been extremely helpful.”

Cllr Gawrysiak, who lives in Elizabeth Road, said he would now carry out a second survey for redoing the white and yellow road markings in the hope of having this included in the next year’s county council budget.

The issue of road repairs was raised at a town council meeting.

“I don’t think it was cost-effective,” he said. “There must be a better way of doing it.”

Cllr Gawrysiak replied: “That patch has been done twice by the dragon patcher and twice it has been a disaster. If you use it on an angled road the sticky stuff slides down.

“The county council estimates there is £165million of outstanding road repairs in Oxfordshire and the budget last year was £20million. We have to make the money go as far as it possibly can.”