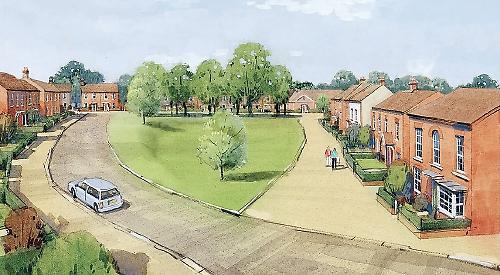 PLANS to redevelop an old garden centre near Henley have been shown to the public for the first time.

Aida Dellal, who owns the former Wyevale site off Reading Road, near Shiplake, is proposing to build up to 40 new homes and an office block on the 4.5-acre plot.

On Friday and Saturday, the gates were opened for the first time in eight years so that people could walk around and view the proposals in detail.

Alex Hersham, Mrs Dellal’s son, and a team of planners were on hand to answer their questions.

Mrs Dellal, who owns the land through her business Dairy Lane, is proposing a “mixed use” development with housing built by Adam Architecture, which specialises in classical and traditional homes and has previously designed projects for the Duchy of Cornwall.

The existing buildings on the site, which have fallen into disrepair and have been vandalised since the business closed in 2009, would be demolished.

Mrs Dellal, who lives at Fawley Court, off Marlow Road, has suggested building 10 four-bedroom properties including five with garages, 12 with three bedrooms, six with two bedrooms and a number of one- and two-bedroom flats.

At least 40 per cent of the units would be classed as “affordable”, with rents or purchase prices fixed below the market rate.

There could also be a building near the entrance with office or retail units and flats above as well as a community centre and a large central green space with hedges, trees and benches. The site would be landscaped.

Bus stops in both directions could be installed outside the entrance along with a mini-roundabout and an improved public footpath leading to Lower Shiplake.

The community centre could be occupied by Henley’s air cadets, whose current headquarters in Friday Street, Henley, is under threat of closure as the Ministry of Defence is looking to dispose of it. The site is earmarked for about 10 homes in the town’s joint neighbourhood plan with Harpsden.

Mrs Dellal hopes to submit a planning application to South Oxfordshire District Council within six months but says she will only proceed with a scheme that the community is happy with.

The land, which falls within Harpsden parish, is next door to Thames Farm, whose owner Claire Engbers has been granted permission for 95 homes on the 14-acre plot despite not being included in the neighbourhood plan.

It is earmarked in the plan for purely commercial development but Mrs Dellal and her son say this would not be commercially viable.

She bought the land when the garden centre shut with the intention of providing a new home for the Toad Hall garden centre, off Marlow Road, but the move was scrapped and another occupant could not be found.

It has been vacant ever since, with huge logs permanently barricading the entrance to deter intruders.

When she first announced her new proposal, the district council said she didn’t have enough evidence that the site could not be restored to its previous use and requested more proof that it had been more actively marketed. Now Mrs Dellal and her son say they have “aggressively” marketed the land and commissioned a second independent review which reached the same conclusion — that an exclusively commercial project would lose millions of pounds because the sale price wouldn’t make up for the development cost.

They say a primarily residential scheme would attract less than half the amount of traffic than a garden centre or other business would.

Jim Munro, of Blandy Road, Henley, who is a member of Henley Town Council’s neighbourhood plan committee, was one of almost 130 people who attended the consultation. He said: “My initial impression is that there’s an awful lot of housing and not much commercial.

“They say it’s the only way to be viable but you can keep producing figures until the cows come home. There’s no disguising the fact that what’s intended here is a fairly large chunk of housing.”

Mike Romans, of Cromwell Road, Henley, said: “I don’t agree with it because I don’t think it will meet need in Henley. We wanted housing for young people in the town but instead they’re building lots for old people. This won’t make up that balance as it will just draw people in from outside the area, putting more pressure on roads and schools. I’m also concerned that it’s a traffic hazard.”

Dean Martin, from Binfield Heath, said: “It would be nice to see this site redeveloped because it’s just wasted land at the moment but what they’re proposing is disgusting. It will just be housing for rich people, not locals who struggle to afford property.”

Tim Woods-Ballard, from Lower Shiplake, said: “It’s a logical and sensible development in principle as the site is a mess and has to be brought back into use eventually.

“However, we’re already fighting over-development at Thames Farm and Shiplake must take 33 houses under its neighbourhood plan, so this whole area is going to double in size. We really need more low-priced houses.”

Emer Bollinghaus, from Shiplake, said: “I don’t want an extra 40 houses because it will put pressure on amenities without any benefits and people living there will be cut off from the wider community.”