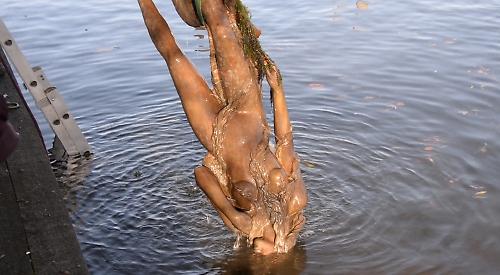 A TEAM of divers and marine engineers recovered a statue which vandals had thrown into the river in Henley.

Experts from Cook Piling, of Hurley, retrieved the 6ft 6in bronze mermaid from the bed of the Thames on Saturday afternoon.

A diver wearing an oxygen tank climbed into the water and explored beneath the surface in search of the submerged statue.

On his third attempt he located it and tied a harness around the base before his colleagues winched it out using a crane on a lorry parked opposite the Red Lion Hotel in Thames Side.

The 370lb mermaid, which was thrown over the railings at Red Lion Lawn during Tuesday night last week, emerged feet first and dripping with water.

The crew allowed the sculpture to hang for a couple of minutes before guiding it back to land and gently laying it on the ground.

It was then taken away by members of Henley Town Council’s parks services team to a secret location.

The statue, which was installed in 2013, was dumped in about 6ft of water and was originally standing upright with its head above the surface but was later knocked on its side by currents.

The vandals, who had unbolted it from the ground, also threw umbrellas and awnings into the river and smashed and upended tables.

Staff from river operator Hobbs of Henley retrieved these but couldn’t pull up the statue as it was too heavy.

Cook Piling, which installs the booms and pontoons for the Henley Royal Regatta, then offered to help the town council, which owns the riverside terrace.

Mayor Kellie Hinton said: “The statue is being inspected and cleaned but the early indication is that it’s pretty robust and wasn’t damaged in any way.

“For now, we don’t want to say where we’re keeping it in case someone tries to steal it.

“The plan was always to sell it for charity and replace it with another artwork so hopefully that can still go ahead, subject to discussions at full council. We’re very grateful to Hobbs of Henley for helping to rescue the furniture and to Cook Piling for providing the specialist help we needed. We are very lucky to have such expertise on our doorstep and they did an incredible job of pulling it out so quickly.

“Sadly, we’re no closer to knowing who did this. It was done in the dead of night and it would have needed tools to remove so it was definitely planned in advance.

“The statue is so heavy that it took three members of our parks team to move it.

“I don’t even think it was a botched theft attempt. I think someone went down there with the intent of destroying whatever they could.

“It was sheer mindless vandalism by people with nothing better to do except spread negativity.

“However, the community responded with positivity and wasn’t prepared to let them ruin things.

“We will eventually have a new piece of art there and we will refurbish the area and it will look better than ever.”

The riverside terrace is used by the hotel to serve customers food and drink during the visitor season.

The attack came days after the area was named as a “hot spot” for young people openly smoking cannabis. Earlier this year Sam Gill, who owns the hotel, called for CCTV to be installed after vandals ripped up and overturned benches, threw litter around and sprayed graffiti “tags” on the walls.

The sculpture, named Ama, was donated by Koh i Noor, a German company which offered statues to 20 locations around the world, and was designed by French artist Amaryllis Bataille.

Under the terms of the council’s contract with the company, the piece can be sold at any time for a minimum of 15,000 euros plus VAT and be replaced with a similar sculpture.

From the proceeds, at least 5,000 euros would be given to a charity chosen by the council and Koh i Noor with the rest going towards the cost of manufacturing a new figure.

To see a video of the statue being pulled out of the water, visit the Henley Standard’s website.