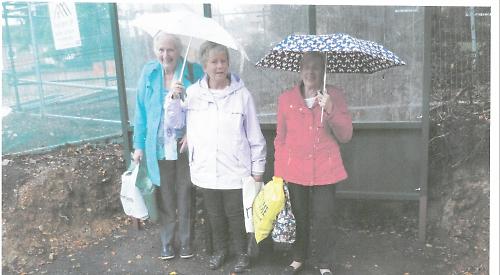 A NEW shelter in Sonning Common could be modified after complaints by residents that it is inadequate.

Bus passengers complained to the parish council that the shelter in Wood Lane, near Brinds Close, does not protect them from the elements.

They said the roof was too small and because the shelter had no sides there was no protection from wind and rain.

Councillors say the most cost-effective solution will be to add to the current structure rather than buying a new one.

Councillor Douglas Kedge said this could cost up to £400 in parts and labour compared with thousands for a new shelter.

He said: “The depth of the roof is about 1ft short. We can put a piece along the front to give the depth needed and put some planks on to the side. This should be entirely satisfactory.”

The bus stop had to be moved to create an access point to build two houses at Brinds Copse, which was sold for development by the parish council for about £500,000.

The shelter was installed in August but was too close to the road so a few weeks later it was removed and then made taller and placed further away from the road.

A single seat was also added at residents’ request and another seat has since been added.

The stop is on the 25 service between Reading and Peppard, which is mostly used by elderly people going into Reading and people travelling to work.

Bernice Ellis, of Brinds Close, urged the council to resolve the problem quickly.

Parish clerk Philip Collings said he was still trying to get quotes for a new shelter and Councillor John Stoves added: “We have a process we have to follow with quotes and there is no way we can contradict that. We are moving forward as quickly as we can.”