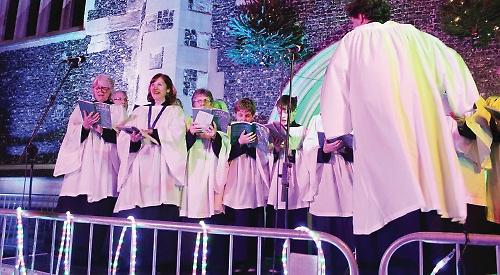 OUTDOOR performances for the Henley Living Advent Calendar should be shortened, says the Deputy Mayor.

Lorraine Hillier said it was sometimes too cold for spectators and performers to stand for half an hour.

She suggested having 15-minute performances, as happened when the event started in 2011.

Musicians, singers, dancers and other acts currently perform for 30 minutes each evening from December 1 until Christmas Eve at various venues.

Councillor Hillier was speaking at a Christmas events “wash-up” meeting at Henley town hall on Tuesday.

She said: “It was terrifically cold this year. Thirty minutes is too long. I preferred it when it was 15 minutes. Maybe inside 30 minutes and outside 15 minutes.”

Councillor Sarah Miller, who chaired the meeting, said that she had seen some children in the audience turn blue with cold.

Town manager Helen Barnett said the calendar’s organiser, Richard Rodway, had done a lot to shorten the format of each event apart from the performances. She said: “What really worked well this year was not doing obligatory food and reducing the amount of raffle prizes.”

Laurence Morris, owner of Laurence Menswear in Duke Street, called the fund-raiser “fantastic” and said it helped boost the profile of the town.

He added: “We are the pioneers in this country and we should be shouting about it.”

Mayor Kellie Hinton added: “It brings people in, not just residents but visitors as well, and it grows every year.”

Councillor David Eggleton added: “There was a special feel to it this year.” Mr Rodway said: “All feedback is gratefully and graciously received and will be considered as part of the planning for this year’s event.”

The Henley Living Advent Calendar was launched in Henley in 2011 by Julie Perigo who came up with the idea after seeing a similar event in Stockholm.

Mr Rodway, a solicitor at The Head Partnership, took over as chairman of the event in 2014.

He extended the nightly shows to half an hour, saying he wanted to give the performers the opportunity to “put on more of a show”. Last year’s calendar collected a total of £5,860, surpassing the previous year’s record by almost £700.

The previous record was beaten even before the final performance at St Mary’s Church on Christmas Eve, which raised £601, the highest total ever for a single night.

The calendar is sponsored by the Henley Standard.