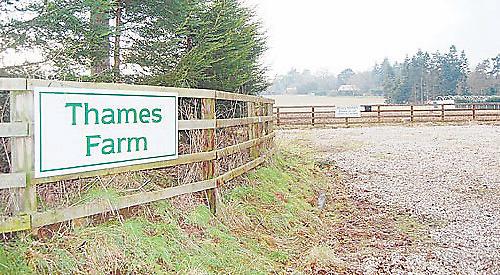 THE fight against plans to build housing on farmland near Henley has so far cost taxpayers more than £75,000 in legal expenses.

South Oxfordshire District Council, the planning authority, spent £24,500 on its unsuccessful defence against a planning appeal by landowner Claire Engbers after it refused permission for 95 homes at Thames Farm, a 14-acre field off Reading Road, near Shiplake.

It then spent another £14,000 in seeking a judicial review of the decision by planning inspector John Braithwaite to approve the development.

After losing that case at the High Court two months ago, the council was ordered to pay £3,360 towards the costs of the Secretary of State.

The last of the sums is yet to be paid as the council is taking its case to the Court of Appeal. A date for the hearing is yet to be set.

The figures, which were published following a request under the Freedom of Information Act by the Henley Standard, do not include time spent on the case by the council’s own staff, nor any costs associated with its battle against an earlier application by Mrs Engbers for 110 homes on the same plot in Harpsden parish. It rejected that scheme in 2013 and successfully fought Mrs Engbers’ appeal the following year but she took her case to the High Court and a judge overturned inspector Ian Jackson’s decision after months of legal wrangling.

By then, however, her smaller, “greener” scheme had been rejected and she opted to pursue an appeal over that instead.

Meanwhile, Shiplake Parish Council has confirmed it spent more than £34,000 fighting both of Mrs Engbers’ appeals and separately pursuing a judicial review of the second.

As the Henley Standard reported last month, it initially announced a figure of £18,000 following a Freedom of Information request query by Garry Forster, from Goring Heath, but has now revised the total. The council has now dropped its fight to focus on producing its neighbourhood plan.

Both councils oppose development at Thames Farm as it is not earmarked in Henley and Harpsden’s neighbourhood plan. They also say that having homes there would be a safety hazard because the land is on a major road with poor pedestrian and cycle links to Henley and Shiplake.

Paul Harrison, Shiplake’s district councillor, said: “It is worth the cost of pursuing because the inspector’s decision would open the door to nullifying neighbourhood plans throughout South Oxfordshire.

Other inspectors have concluded that our housing land supply is higher but if it were allowed to stand, Mr Braithwaite’s ruling could be used as a precedent for other planning decisions.

“More than £500,000 has been spent on neighbourhood plans across the district and if it were accepted that we don’t have a three-year land supply they would be dead.” David Pheasant, vice-chairman of Shiplake Parish Council, said the action was worthwhile due to the high number of objections from villagers and “legitimate concerns” about safety.