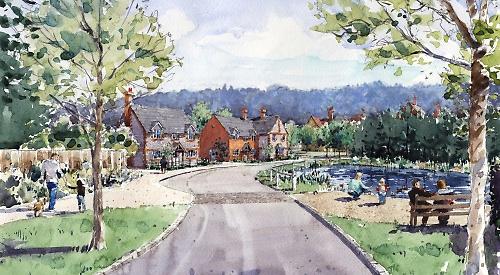 A PUBLIC consultation on plans for 82 new homes at land off the Fair Mile in Henley will be held at the Town Hall on Wednesday (14).

Developer Thames Properties wants to build the houses on the site, which was one of those included in the joint Henley and Harpsden neighbourhood plan to recommend where 450 new homes in the town should go.

The properties will be a mixture of sizes from one-bedroom flats to five-bedroom family homes, while there will also be communal green spaces and wooded areas, walking and cycling routes and a central pond, as well as on site parking for more than 200 cars.

The company presented the plans to town councillors and members of the neighbourhood plan steering group earlier this month and will now hold the exhibition, where members of the public can consult them on the development, from 4pm to 8pm.

Simon Fruchter, of Thames Properties, said: “The proposed scheme would make a significant contribution towards Henley’s housing need with a good mixture of housing sizes and types.

“Importantly, the scheme would deliver a significant number of smaller and affordable properties which are particularly needed in the town.

“We’re proud of the plans being brought forward, which have been carefully designed using locally inspired materials to make sure that it blends in with the surrounding area.

“We look forward to our upcoming consultation event and hope that as many local people as possible will come along to view the plans.”