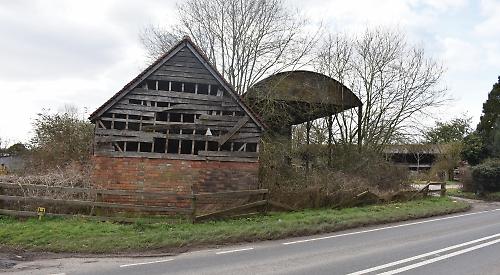 A CARE home could be built on the Mapledurham Estate.

Hamberley Developments, of London, has applied for planning permission to erect a 65-bed home at Greendene Farm, off the A4074 in Chazey Heath, near the Packhorse pub.

It says the home would create the equivalent of 67 full-time jobs.

The company says the 1.15-hectare site has not been used for farming for more than 20 years.

A planning statement by Dominic Lawson Bespoke Planning, of London says: “The site currently comprises a collection of dilapidated, unused agricultural buildings and two residential dwellings and a bed and breakfast.

“All the agricultural structures are in a state of disrepair and two of the residential dwellings are uneconomical to repair and have have been significantly altered with unsympathetic materials.

“They no longer resemble a dwelling typical of the Chilterns. The only building on site that has been considered to be of any value is Greendene Farmhouse.

“This property is currently in use as a bed and breakfast and will retain this use following the redevelopment of the rest of the site. The proposed redevelopment of Greendene Farm offers significant benefits to the local economy, the local residents and the Chilterns landscape.

“Without this development the site is likely to remain redundant and unsightly in this beautiful landscape for many more years.”

The developer has been in discussions with South Oxfordshire District Council, the planning authority, about its plans since July 2016.

It has also had meetings with Mapledurham Parish Council and the Chilterns Conservation Board as the land is within the Chilterns Area of Outstanding Natural Beauty. The home would provide 24-hour care for frail elderly residents, including those with dementia.

It would have communal dining and living rooms, a cinema room, a hairdressers, a café and other ancillary facilities.

There would be gardens for the residents, 32 car parking spaces, a single space for a minibus and ambulances and 10 bicycle spaces.

The proposals include more hedges and infilling gaps in the existing ones.

There would be a single access to the home from the main road instead of the three currently and a new path.

The developer also wants to create the “Mapledurham Loop”, a promoted pedestrian route to encourage people to walk to and from Mapledurham House, about three miles away.

The planning statement says: “At the current time, there is no footpath along Reading Road (A4074) so there is limited access from the site to the bus stop and the nearby Packhorse pub.

“The development proposal therefore proposes a new footway for a short length to the north and south of the site access to provide pedestrian links to the existing bus stops on the A4074.”

Public consultation on the plans was held at Caversham Heath Golf Club in Mapledurham in January.

Nine people attended the event. The planning statement says: “Eight of the residents considered the site in its current situation to be a significant blight on the beauty of the landscape and were very supportive of the high-quality development proposed and the public benefits associated with the proposal.

“Additional comments included support for the footway to the bus stop on the A4074 and the wider landscaping works that would enhance the estate and landscape.

“The comments and suggestions arising from this consultation process have been addressed and it is considered that the proposal being presented complies with the findings of the process.”

The district council will make a decision by May 30.