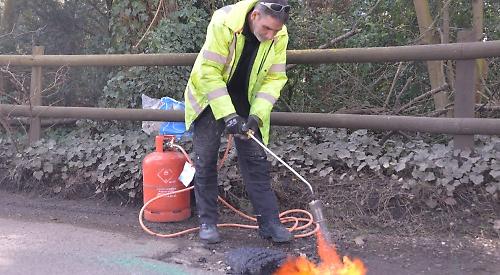 POTHOLES repaired by a Henley town councillor fed up with the state of the town’s roads were redone the following day by the county council.

David Eggleton spent £120  on bags of aggregate and Tarmac and hiring a blowtorch to fill the holes in Gillotts Lane and on the Gainsborough estate.

He said many of the holes had been correctly reported to Oxfordshire County Council, the highways authority, via the Fix My Street website but no action was taken.

But the day after he carried out his DIY repairs last month workmen redid it and fixed other potholes in Gillotts Lane.

Councillor Eggleton said he had only done the work himself as he didn’t want anyone to be injured as a result of a pothole.

He said: “I think sometimes things need moving along a little bit faster. Sometimes you have to make a point, it’s not a question of showing anybody up.

“I shouldn’t have had to be out there in the first place, they should have filled the holes when I reported them and when people reported them a month prior to me doing the work.”

Councillor Eggleton, who lives in Gainsborough Road,  acknowledged that the county county was under financial pressure but said that one team of workers should be sent out to do the job rather than marking the potholes, then filling them temporarily before a permanent repair.

He added: “I took adequate health and safety precautions in what I was doing. I had my van on the side of the road and I had a high-vis jacket on.”

The county council didn’t respond to a request for a comment but Stefan Gawrysiak, Henley’s representative on the council, has said he understood Cllr Eggleton’s frustration but added: “We do have to be careful in repairing them ourselves because there are insurance and health and safety issues.”