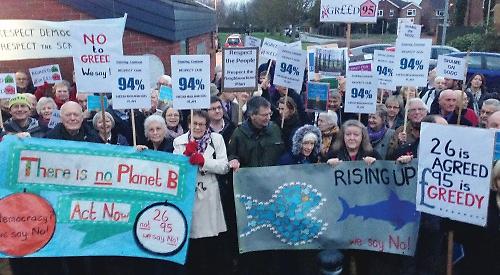 A DEVELOPER is ignoring the wishes of residents of Sonning Common with its application for 95 homes, a planning inquiry heard.

Tom Cosgrove QC, for South Oxfordshire District Council, was speaking at an appeal by Gallagher Estates after the planning authority refused permission for the development off Kennylands Road.

He praised the community for its work on and support for the Sonning Common neighbourhood development plan, which earmarks part of the site for 26 homes.

Mr Cosgrove said the application was in direct conflict with the plan, which passed a referendum with 94 per cent support in October 2016.

He told the planning inspector Kenneth Stone: “The neighbourhood plan not only embodies a shared vision of the community founded on a comprehensive approach to planning which accords to Government policy, but is also a key starting point for the determination of this appeal in law.

“To that end there is a clear plan-led strategy for housing which identifies where housing should and should not go. The plan is unambiguous.

“The community, fully in accordance with up-to-date Government policy, has followed the required process, made compromises and decisions and produced a clear set of policies to enable clear, plan-led decisions to be made on planning applications.”

The council’s planning committee refused the application in March last year on the grounds that it did not conform with the neighbourhood plan and due to the negative effect it would have on the setting of the Chilterns Area of Outstanding Natural Beauty.

Mr Cosgrove said: “The proposal would extend the urban form of Sonning Common into the undeveloped, semi-enclosed dip slope landscape in an intrusive way that would suburbanise the currently rural and unspoilt setting to the village.

“It would be unacceptably harmful in both visual and landscape terms and contrary to the neighbourhood plan, which carefully identified and limited the site allocation in a way that sought to avoid harm and expressly avoid the kind of development now proposed.”

Megan Thomas, for Sonning Common Parish Council, said residents and the neighbourhood plan working group had already gone “above and beyond” to accommodate extra housing.

The district council had allocated 138 homes to be built by 2027 but the plan allocated sites for 195 plus reserve sites for another 45 due to the anticipated increase in demand.

Mrs Thomas said: “Not only does Sonning Common have a made neighbourhood plan but the parish council chose to provide considerable flexibility when identifying sites for housing.

“The proposed development would bulge out of the edge of the village, take urbanisation up to ancient woodland, Bur Wood, and result in harm to the rural setting of the village.

“It would also physically encroach on undeveloped land which contributes to the separation of Kidmore End from Sonning Common in circumstances where it is desirable to maintain the separate identities of the two settlements.”

Paul Tucker QC, for Gallagher, said Sonning Common was expected to be allocated 150 additional homes by the year 2033 when the district council’s local plan was revised.

He said: “The additional 69 units provided in addition to the 26 allocated are palpably needed to make up that figure.

“Despite having allocated more than 138, the neighbourhood plan has now been confirmed to be in need of review in order to allocate additional sites for housing developments in order to meet the increase of 150 additional homes.

“The identification of sites for an additional 150 dwellings is overwhelmingly likely to focus upon the ‘cone’ of land outside the AONB which extends to the south of Sonning Common. including the appeal site.”

Mr Tucker said the appellant’s landscape architect Andrew Williams would prove the harm to the landscape from the development would not warrant rejecting the plans.

He said: “The proximity of the AONB to Sonning Common is recognised and understood — it is a designation which covers much of the south of the district and has left only very limited opportunities for development.

“That point is ‘made good’ by the fact that the neighbourhood plan has promoted allocations within the AONB.

“It is for that reason that this site will be a very obvious candidate site for allocation in the emerging neighbourhood plan review irrespective of the outcome of this appeal and it is against that background that any supposed impact upon the AONB needs to be judged.”

Mr Tucker said the council’s own planning officers had recommended the application be approved.

He said: “In doing so, they rightly noted there were no ‘technical objections’ to the planning application and that there was an ‘absence of any demonstrable harm’.

“This appellant wholeheartedly agrees with that analysis.”

More than 50 residents were bussed in from the village to listen to the opening of the inquiry at Didcot civic hall on Tuesday.

Some spoke against the application. Tom Fort, a parish councillor, said: “The response from the village to the application for 95 homes was incredulity.

“If this were granted permission it would be incredibly difficult to carry on with what would be a breach of the plan.

“It would be a blow to the whole concept of neighbourhood planning, which in my view was one of the few genuinely progressive pieces of forward-thinking legislation in the last 20 years.”

Julia Whitelaw, of Bird Wood Court, said: “We are here today because a group of so-called professionals decided before the ink was even dry on our plan that they would exploit loopholes in the system and attempt to sabotage our neighbourhood plan.

“This was while suggesting they were doing a favour. They have concluded, rather than respecting local democracy, it would be better for the village to have an extra 69 homes on a larger piece of land.

“This is in an area which people, as a result of our consultation, concluded was appropriate for 26 homes.

“Neighbourhood plans are not about nimbyism but about sustainable development. We have provided 41 per cent more homes than allocated to us.”

The inquiry was due to end today (Friday).