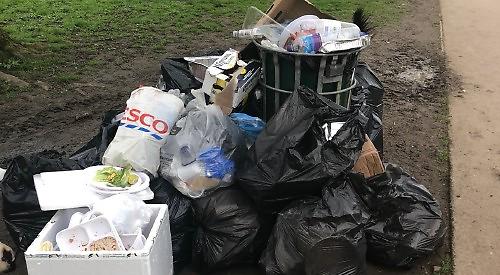 RUBBISH was left strewn across a Henley beauty spot on the hottest day of the year.

Bin bags full of overflowing waste were found piled high in Marsh Meadows on Sunday morning, along with used barbecues, bottles, food, bones and plastic drifting on the River Thames.

It is believed hundreds of people visited the riverside green space the previous day but residents are furious they have not cleared up after themselves.

Many dog walkers said it was unsafe to let their pets off the lead because of the food, broken glass and chicken bones left on the meadow.

One resident told the Henley Standard people had been urinating on the meadow, in bushes and in the edge of of her garden, as well as throwing toilet paper around.

Another, Maureen Dougall, who lives in Station Road, said: “It was totally disgusting. Litter, although mostly disposed of in black bags, had been torn open overnight by the wildlife.  We met a couple walking their black labrador who had picked up chicken bones, which could have been fatal if the owners had not caught the situation in time.

“The owner of the house at the end of Mill Lane had been inundated with people peeing into her garden and leaving even more litter.

“It seems that there had been some kind of food festival held by families visiting Henley and they had deemed it ok to leave all their litter, ground sheets, blankets behind for our park staff to collect the following day.

“There should be some supervision of the meadows during the summer time  in order to prevent this kind detritus, charges should be made for this vast amount of litter collection and people should be made to realise that someone has to pay for all this extra work.”