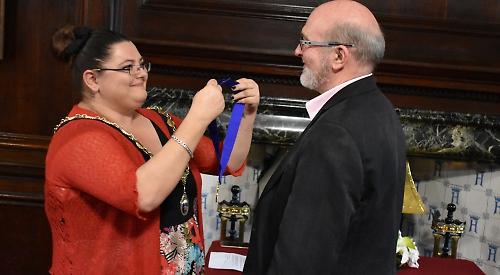 THE co-founder of the Henley Youth Festival, a man held prisoner of war for four years and the chairman of a charity have been awarded the town medal.

Alfie Hay, Dick Charlton and John Green were presented with the honour by Mayor Kellie Hinton at a ceremony at the town hall.

Mr Hay, from Bix, helped launch the youth festival 25 years ago when he was headteacher of Trinity Primary School in Henley.

Councillor Hinton, who was a pupil then, called Mr Hay “special”.

“What Alfie does, the way he touches people in their heart and enthuses them, in particular our young people, is evident across the town,” she said.

“You would be hard pushed to find somebody who has grown up in the town in the last few decades and doesn’t know who Alfie is and how he has impacted their lives.

“I knew as soon as I had a daughter she had to go to Trinity. The start I had in life I will always remember because of people like Alfie.”

Mr Hay said he was honoured to receive the medal.

“It’s not often that I get an accolade from a pupil,” he said.

“The first night in Henley we were at peace with this place. Our children could walk into town when they were juniors and we weren’t worried about them because it was a small enough town that everybody knew each other.”

Mr Green, 82, from Maidensgrove, is the chairman of the Henley and Peppard branch of the Royal British Legion.

He was honoured for his fund-raising efforts. Last year he walked 100 miles in four days in the Nijmegen Marches in the Netherlands in aid of the Poppy Appeal.

Councillor Hinton said: “A lot of the Legion’s work is about remembering and not forgetting what people have given for us and our freedom. John wants to teach future generations and continue that memory.”

Mr Green said he was accepting the award on behalf of the branch members, volunteers and those who had donated.

“It’s a huge honour to receive this and it’s very much appreciated,” he said. “I just represent what a lot of other people are doing, not just those that have done the collecting, but those who have done the giving.

“To me, my biggest achievement is that all three cadet units in the town have become affiliated to the branch.”

He was born at Hennerton Cottage, off Wargrave Road, and educated at the National School, now The Henley College.

He received his call-up to join the Oxfordshire and Buckinghamshire Light Infantry in 1939 and was posted to East Woodhay, near Newbury.

In January 1940 — four months after the start of the Second World War — he left Southampton for Le Havre before his regiment was sent to the front line in Belgium.

The British troops were forced to retreat to Lille and then Cassel in northern France.

On May 29, 1940 Mr Charlton was captured by the Germans. He and the other prisoners were taken on a four-day train ride in old wooden carriages with little or nothing to eat to a prisoner of war camp on the German/Polish border.

The prisoners were stripped of their clothing, had their heads shaved and were photographed.

Mr Charlton was held prisoner until January 7, 1945 when the camp was liberated by the Americans.

He still had to march to Brussels, from where he was flown back to Ford, near Worthing, West Sussex.

After being demobbed, Mr Charlton returned to Henley and joined the Harpsden branch of the Royal British Legion, where he is still a member today.

He went on to play for Henley Town Football Club and was in the 1947 team that won the Oxfordshire Senior Cup.

In 1961 he married Doris and the couple had two daughters.

Mr Charlton is believed to be the last surviving member of the Oxon and Bucks Light Infantry that fought in the war who is still living in Henley.

Town councillor Ken Arlett, who read his commendation, said: “As Dick enters his 98th year, this is an opportune time to present him with a town medal for the courage he gave to help secure our country and our town.

“In presenting Dick with this medal, it can be shared with all the soldiers from Henley that served and never returned from the battlefields and prisoner of war camps.

“One of the main criteria for receiving the town medal is that you have given your time ‘above and beyond the call of duty’. Dick passes that test and the other criteria with flying colours.”

Mr Charlton said he was delighted to be honoured.