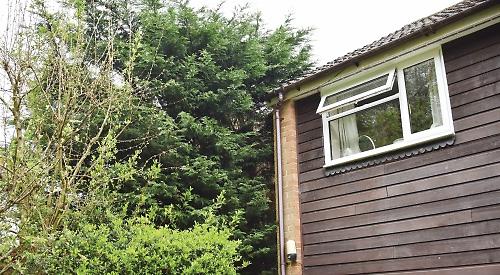 A ROW has broken out between a Peppard parish councillor and her neighbour over a leylandii hedge between their homes.

John and Joan Bawden, of Shiplake Bottom, say the 18ft high hedge is overgrown and the branches are resting on the roof of their house, causing damp and damage.

The couple also claim that Veronica Treacher, who lives next door, refuses to cut back the hedge despite having previously complained about the same problem in the street at a parish council meeting.

But Councillor Treacher denies the hedge is overgrown or causing damage and says it was cut back in the autumn.

The Bawdens have lived there for more than 50 years and the hedge has been there for at least 30 years.

The couple say that when they asked Cllr Treacher to have it cut back she told them they should pay for the work themselves. They got an estimate for £180 but didn’t want to pay that much.

Mrs Bawden, who is retired, said: “The tree is leaning on one of the bedrooms. We’d been asking for more than a month and were told we would have to do it ourselves, which is fair enough but it costs the earth. It’s frustrating because I have to go into the bedroom and clean the mould off once a month. It does not affect her property.

“I don’t know what we can do other than do it ourselves.”

The couple claim the hedge was last cut back about four years ago after they asked Cllr Treacher.

Mrs Bawden said: “We asked a couple of times and she agreed to do it and it was done very well.”

She said she would be happy to split the cost of the work needed now with their neighbour.

Mrs Bawden said: “Six trees were planted when she moved in. They have grown higher than the two-storey house, hence the branches on the roof.”

In January, Councillor Treacher said she was unhappy about her neighbours in Shiplake Bottom parking inconsiderately, blocking pavements and driveways.

Last year she complained about residents allowing their bushes and hedges to overgrow so that they blocked the pavement, making it difficult for people with pushchairs or in wheelchairs.

Mrs Bawden said: “I would like to congratulate Peppard Parish Council on the success of its campaign to get residents to cut/trim their trees and bushes that were encroaching on the pavements. Well done them. It does, however, seem ironic that a member of that council refuses to have their tree that is encroaching on my property cut or trimmed. Obviously one rule doesn’t fit all.”

Cllr Treacher, who worked in education before retiring and has lived in the village for 40 years, said she did maintain the hedge.

She said it was last trimmed in the autumn but the contractor did not cut it back as severely as he could have done.

However, she said: “There are not branches on the neighbouring house. They may be brushing against their house but they are only very loose. Leylandii do not have big branches.

“I think it’s absolute nonsense that it could be causing damp in one of their bedrooms. It could not be unless the wall is faulty.

“It’s more likely to be the condition of the room due to air circulation and I have spotted in the past that the room is used for drying laundry.

“They have a right to remove it. They have certainly done other parts in years past.

“I have pointed out that they can get someone to take the top off but they said it cost too much.”