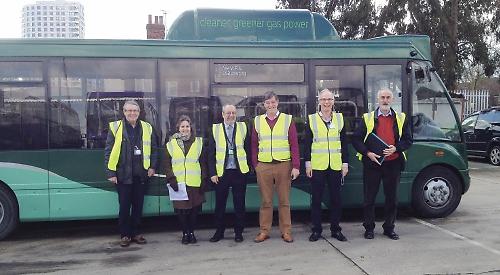 A NEW bus service will begin in Henley in July after the town council rubber-stamped the deal.

Councillors agreed that Reading Buses will take over the routes for the town centre from Whites Coaches.

The new service will run from 7am to 7pm every weekday, compared with the current 151 to 154 services, which run from 9.30am to 2pm. The hours could be extended further if the service proves to be popular.

Councillor Stefan Gawrysiak, a member of the ruling Henley Residents Group who chairs the council’s bus working group, told a council meeting: “We decided that Reading Buses was the best company to go with.

“The bus itself is powered by biomethane gas so it is sustainable and environmentally friendly so it ticks our air quality agenda as well.

“The bus is six or seven years old but has been refurbished and the outside will be liveried in Henley colours. Every day it will be washed inside and out.

“Reading Buses are marketing experts so we hope to increase the patronage of this bus. They employ friendly people who they train as drivers.”

Councillor Julian Brookes, leader of the opposition Conservative group on the council, said the service should have been running by March and he was unhappy that the news had been published in the Henley Standard before being formally agreed by the council.

Cllr Gawrysiak replied: “I think it is really important that the publicity is out there and people can come and hear and see the decision being made. I make no apology for that.”

Councillor David Nimmo Smith (Con) said he welcomed the decision and said it was a “long time coming”.

Cllr Gawrysiak said: “Last May the Henley Residents Group took back control of the council. Since then there have been lots of initiatives that have happened and this is the latest example of that.

“As Councillor Nimmo Smith said, we have been talking about it for three or four years — well, why hasn’t it happened?

“Under HRG, things are going to happen and this is the first of many.”

Cllr Brookes stood up to challenge this statement but Mayor Kellie Hinton told him to sit down, adding: “I am standing and I am speaking and we are moving on.”

Speaking after the meeting, Cllr Brookes said: “All the heavy lifting for the project was done in 2016/17 under Conservative chairmanship.”