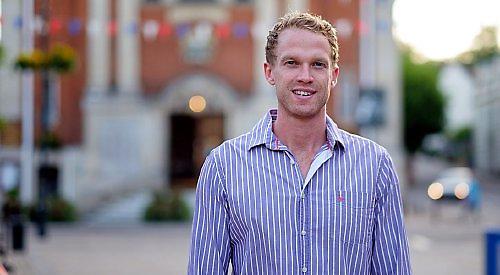 A CHIROPRACTOR is to stand for the Conservatives at the forthcoming Henley Town Council by-election.

Laurence Plant, 30, of Ancastle Green, is the clinic director at Henley Practice, which he set up in 2015. It is based in the Greys Road car park, above its sister company Athlete Service, where he also works.

Mr Plant, who has lived in Henley most of his life, said he wanted to be proactive and help address some of the town’s issues, many of which his clients raised.

He said: “Working now for quite a few years in the centre of Henley, you’re exposed to so many of the good and bad things, whether that’s facilities, parking or open spaces.

“On the council I can obviously represent many opinions and do my best to see what can be done about them rather than listening and doing nothing.

“It’s one thing to complain about it and another thing to say, ‘well, what can I do about it, how can I go about making change?’”

He said he was “quite nervous” about the election, adding: “She’s a lovely lady, the HRG candidate, but at the end of the day you’re still out to win and it’s doing your best to put the strongest argument together and hopefully the local community will come out and vote for me.”

Mr Plant grew up in Greys Hill and Greys Road and attended Valley Road Primary School and Gillotts School before winning a scholarship to Pangbourne College.

During school holidays he worked at the Hobbs of Henley boatyard and the Franco-Belge Patisserie in Duke Street, which he says gave him a valuable insight into how independent businesses can thrive in Henley.

He rowed at Henley Royal Regatta three times, once reaching the semi-finals of the Princess Elizabeth Cup.

Mr Plant said his priorities were:

• Working for a proper solution to the misuse of Marsh and Mill Meadows.

• Creating the right conditions for local shops and businesses to thrive drawing on his own experience.

• Championing the delivery of truly affordable housing to enable first-time buyers to buy a home in their town.

Mr Plant said: “I’m an avid runner, swimmer and cyclist and run on Marsh and Mill Meadows so to see the state they’re left in come Monday mornings is upsetting.”

He said the problem could be solved quickly, suggesting that Henley parks services staff should
co-ordinate a working group to regulate the areas.

He said if he was unsuccessful next month he would stand again in a year’s time when the whole town council is up for election.

Mr Plant added: “Hopefully, I can put together a strong campaign and win in three weeks but I’ll definitely still be here next year and in years to come.”

Miss Chandler-Wilde, a journalist, resigned saying she was struggling to fulfil her council duties because of growing work commitments. She had been a councillor since 2015.

Her departure followed that of fellow Conservative Simon Smith, who stepped down in November. A by-election to fill his seat in the Henley North ward was won by Tory Donna Crook.