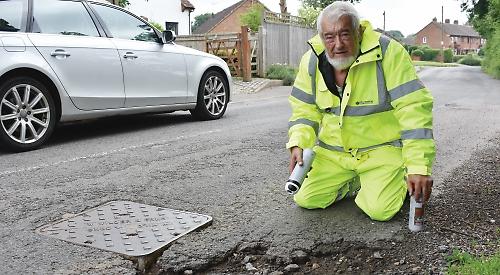 TWO men from Shiplake have been trained to officially identify potholes because they want to rid them from the village’s streets.

Parish councillor David Pheasant and resident Ernie Povey are some of the first people in Oxfordshire to be trained as Fix My Street “super-users”.

The website is used by Oxfordshire County Council, the highways authority, to log problems on the county’s streets, such as potholes and blocked drains.

The super-users scheme is being trialled by the authority to help resolve problems more quickly.

Mr Povey and Cllr Pheasant have been trained to identify different types of pothole according to how dangerous they are by highways officer Tracy Morton.

The trio walked along Station Road, Shiplake, examining potholes so the men could learn to recognise ones that should be reported.

Potholes categorized as high priority should be fixed within 24 to 48 hours and those with a lower priority should be repaired within 28 days. The men have been given red and white spray paint to mark potholes, depending on the type they are, and high-visibility jackets and trousers to wear while they carrying out inspections.

Councillor Pheasant will focus on Lower Shiplake, where he lives, and Mr Povey will concentrate on Shiplake Cross, near his home.

The training means that the council can take the men at their word when they report a pothole and does not have to send someone out to check.

The reports will go straight to Skanska, the council’s contractor, to respond.

Cllr Pheasant, who is vice-chairman of Shiplake Parish Council, put himself forward after having to replace five tyres on his car in two years which he says were damaged by hitting potholes.

He said: “We talked through with the officer what we wanted to be done and how we wanted faster and better repairs.

“We were shown how a hole had to be marked and how it had to be classified in terms of how deep it is. What we mark does not get priority but what we say is given greater weight.”

He said the parish council felt it had a responsibility to do something about the problem of potholes.

Mr Povey said he had seen the village’s roads deteriorate in recent years and wanted to do something about it.

“I felt they needed to be fixed more quickly than they are doing them these days,” he said. “Now if I report something and it’s serious it should be done within 48 hours.”

Mr Povey said he was still concerned about the quality of the repairs.

He said: “I don’t think they are being done properly. It’s all sweep and fill.

“They used to do them properly where they would be dug out and then the road was relaid with Tarmac. I’ve had two hip operations so I can really feel it when I hit a pothole in the car. It hurts.”

David Bartholomew, who represents Shiplake on the county council, had asked parish councils in his ward if they wanted to take part in the training scheme.

He said: “I suggested Shiplake because I know the parish council is already diligent in reporting potholes.

“It gives members of the parish greater power and responsibility. It cuts out a series of steps in the process and should speed it up.

“I’m grateful to David Pheasant and Ernie Povey for taking part in the trial and I have every confidence the results are going to be good.

“There are no additional costs and it predicts a saving on costs because it means the roads do not require a highways inspector.

“But this is not just about cost saving, it’s about having an effective system. Sometimes solutions do arise out of adversity and make people think about alternative solutions to problems.”

The scheme is also being trialled in Steventon and could be rolled out across the county if it is successful.