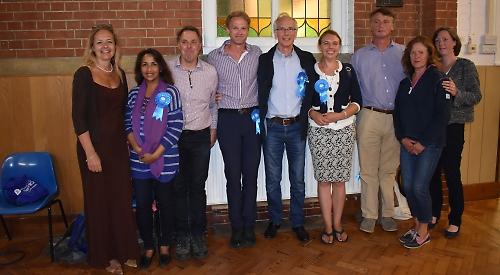 He got 773 votes in the poll as he beat Michelle Thomas, of Henley Residents Group, who got 671 votes.

The seat was up for grabs in the Henley South ward following the resignation of Conservative Helen Chandler-Wilde in April.

The polls at Henley leisure centre in Gillotts Lane, Trinity Hall in Harpsden Road and the Christ Church Centre closed at 10pm and the votes had to be verified and counted.

The turnout was 32 per cent with 1450 votes cast. There were six spoilt ballots.

Mr Plant, 30, of Ancastle Green, is the clinic director at Henley Practice in Greys Road car park, which he set up in 2015.

He said: “Thanks to everyone who helped me across the town. Thanks to Michelle for being such a gracious candidate, I have had lots of good conversations with her.

“The turnout of 32 per cent is awesome, it shows people are interested and care about what is going on. I’m going to be my best for them.

“I’ve been concentrated on work for the last three or fours years but now I’ve got a bit more time to focus on this.

“The positivity I have had from people on the doorstep has been amazing. People have so many great ideas and I want to express those and show how much I care about doing this.”

Mrs Thomas, 49, of Belle Vue Road, was the first to congratulate Mr Plant when the result was announced.

She thanked everyone in the town who supported her.

Mrs Thomas, who works at Leander Club, said: “I want to thank every single person who voted for me. I knew it would be tough to win the seat because it was a Conservative seat before.

“I am extremely proud of the work I have put in and the work HRG has put in. I think Laurence will make a fine councillor and I look forward to seeing what he can achieve for the town.

“I’m looking forward to going back to my normal family life. I have been out every afternoon and evening but my family have been so supportive.”

It now means the political make-up of the council is eight HRG members, seven Conservatives and one Independent Conservative.

Miss Chandler-Wilde, a Telegraph journalist, resigned, saying she was struggling to fulfil her council duties because of growing work commitments.

A by-election to fill his seat in the Henley North ward took place in January and was won by Conservative candidate Donna Crook.

That was the second town council by-election since May last year when two more took place following the resignations of two more Conservatives, Dylan Thomas and Martin Akehurst, a former mayor.

These were won by Henley Residents Group’s Glen Lambert and Ken Arlett, the current Mayor and Deputy Mayor.

For the full story and analysis see next week’s Henley Standard.