Bowling back to Twenties 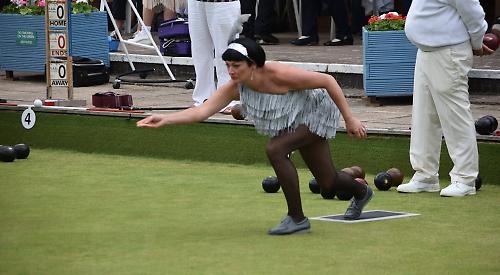 IT was almost like a scene from The Great Gatsby, only the participants were not quite as glamorous as Hollywood stars.

Members of Henley Bowls Club and town councillors dressed as gangsters and flappers to celebrate the club’s 90th anniversary.

About 50 people gathered at the green in Mill Meadows on Saturday afternoon and were split into 12 teams for a match.

Many had made a special effort for the occasion, raiding charity shops and their wardrobes for pinstripe suits, trilbys and head dresses in order to look the part.

Only Councillor David Eggleton looked somewhat out of place in his Cavalier costume which he usually wears to entertain visitors.

Councillor Donna Crook was generally deemed to have achieved one of the best looks with her black dress and a black feather in her hair.

Donna, who attended with her partner Rob Peters, said: “I dug the dress out of my wardrobe and it’s about 20 years old so it’s practically vintage. I found the head dress in a charity shop.

“I thought I’d get into the spirit of the occasion. It was great fun and I really enjoyed it but I’m absolutely rubbish at bowls as I've got no co-ordination whatsoever!

“I’m left-handed, you see, and I was using my right hand so I was unsteady and the wood was going all over the place. However, it is a great sport and I’d encourage anyone to do it. The bowlers were lovely people too.”

Councillor Kellie Hinton, who attended with her daughter Hallie, seven, said: “The dress I had was repurposed because I actually bought it as a funeral dress!

“We looked online for a hairstyle but they looked really complicated and despite my mother being a hairdresser, I have no idea what to do with hair so we went for the low buns and side partings with the gelled look.

“Hallie had one of those flapper headbands from a magazine which she took some persuading to wear but once she arrived and saw how much effort everyone had gone to she felt much more confident. I loved seeing all the boaters and all the flapper-style dresses — it brought a little bit of glitz to the lawn. Donna looked like she’d stepped out of the Twenties.”

Councillor Julian Brookes researched what to wear online before buying his outfit in a shop in Reading as he was swayed by the trilby and white braces.

He said:“It was a great celebration. I thought the bowls club members and Donna and her partner were dressed up to the nines. My own bowling was erratic. The green was in immaculate condition — they must go round with a pair if scissors. I think we left it in the condition in which we found it!”

After the match there was a buffet and Mayor Glen Lambert cut a birthday cake made by member Brian Duddy.

Club chairwoman Sally Daniells said: “I was pleasantly surprised how everyone dressed up — it was fantastic. We had an amazing time — there was so much laughter. The councillors can’t wait to come back again and want to come to our gala this weekend. I think it’s because we fed them so well!

“We try everything we can to keep the club going. It brings so many people together and everyone looks out for each other.”

The club was formed in 1928 and has been on its current site, which is owned by Henley Town Council, all that time. Its current clubhouse was built in 1989.