Now lasers could be used to light bridge 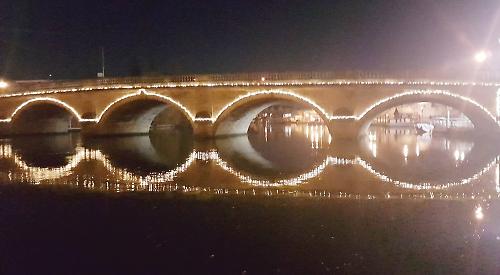 LASERS could be used to light up Henley Bridge at night.

The town council is looking at alternatives to the two strings of 800 LED lights that are currently attached to the Grade I listed structure.

Artist Clive Hemsley installed the lights in February but without planning permission and Oxfordshire County Council, which is responsible for the bridge has said they should be removed.

However, residents praised the installation and a petition calling for the lights to stay attracted 2,400 signatures.

Town clerk Janet Wheeler, who was tasked with looking at an acceptable alternative, revealed the possibility of lasers being used at a meeting of the council’s town and community committee.

She said one of the council’s contractors had been in contact with the county council but the response was “less than helpful”.

Mrs Wheeler said: “They did reiterate they were against direct fixings on to the bridge.

“We are now looking at projecting on to the bridge with the use of lasers, the advantage being they would not be invasive fixings, and we should have progress by the next meeting.”

Speaking after the meeting, town and county councillor Stefan Gawrysiak said that Mr Hemsley’s lights were likely to be removed at some stage.

“My view is to keep the lights on the bridge until after the regatta and the festival and then make the decision,” he said.

Mr Hemsley said: “The idea of laser lights is going back to the Eighties a bit. I don’t think modern lasers would look good at all. It could be very dangerous if it was not done correctly.

“I think they should live with what we have for the time being.

“After the festival get the town’s views on it — there should really be a vote.”

Mr Hemsley said his lights had not worked since being vandalised in April.

Someone removed a stretch of the LED chain from the northern face of the bridge at Red Lion Lawn. They tore the lights from the stonework, pulling away chunks of the masonry glue which had been used to fix them in place, then cut off a 10m section.

Mr Hemsley said he hoped to have the lights repaired in time for the regatta and festival. In the long-term he would like to see festoon lighting on the bridge.