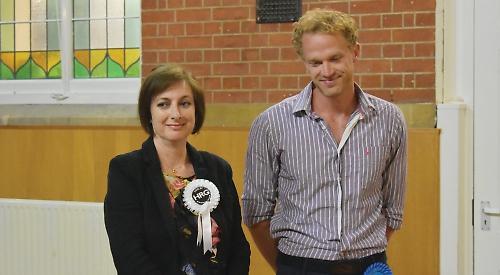 THE Conservatives in Henley are celebrating after winning their second town council by-election this year.

Tory candidate Laurence Plant claimed victory over Michelle Thomas, of Henley Residents Group, by more than 100 votes in the election for the vacant seat in the Henley South ward.

He polled 773 votes compared with her 671 on a turnout of 32 per cent. There were six spoilt ballots.

The result follows another Conservative victory in a by-election to fill a seat in Henley North ward that took place in January.

It means the Tories now have seven councillors but HRG still controls the council with eight after taking two seats from the Conservatives at by-elections in May last year plus there’s one Independent Conservative.

Frank Browne, chairman of the Henley Conservatives, said: “We are very pleased with the result.

“Given the scale of the by-election defeat we had in May 2017, we have been very successful.

“I think Laurence will be a fantastic councillor. He truly deserved to win — I have never known a candidate work so hard.

“He is Henley born and bred and runs a business in Henley. He understands Henley very well and the issues he campaigned on resonated with residents.”

The by-election was called following the resignation of Conservative Helen Chandler-Wilde in April to concentrate on her work as a Telegraph journalist. The polls closed at 10pm on Thursday last week and the count took place at the Christ Church Centre in Reading Road, where the result was declared at 11.20pm following a recount as there were 10 more voting slips than the 1,450 votes cast.

About 30 people were present, including Conservative councillors and suppporters who applauded loudly when the result was confirmed by deputy returning officer Matt Gaskin.

Mr Plant, 30, who lives in Ancastle Green and is the clinic director at Henley Practice in Greys Road car park, said: “Thanks to everyone across the town who helped me. The turnout of 32 per cent is awesome — it shows people are interested and care about what is going on. I’m going to be my best for them.”

During his campaign, he pledged to help tackle the misuse of Marsh and Mill Meadows and the town’s traffic problem and to support shops and other businesses. Mr Plant said: “I’ve been concentrating on work for the last three or four years but now I’ve got a bit more time to focus on this.

“The positivity I have had from people on the doorstep has been amazing. People have so many great ideas and I want to express those and show how much I care about doing this.”

He thanked Mrs Thomas for being a “gracious” opponent, adding: “I have had lots of good conversations with her.”

Mrs Thomas, 49, of Belle Vue Road, was the first to congratulate Mr Plant when the result was announced.

She said: “I want to thank every single person who voted for me. I knew it would be tough to win the seat because it was a Conservative seat before.

“I am extremely proud of the work I have put in and the work HRG has put in. I think Laurence will make a fine councillor and I look forward to seeing what he can achieve for the town.

“I’m looking forward to going back to my normal family life. I have been out every afternoon and evening but my family have been so supportive.”

Mrs Thomas, who works at Leander Club as an office assistant, founded the Keep Henley Active pressure group which campaigned against the closure of LA Fitness in Newtown Road.

Councillor Ian Reissmann, chairman of HRG, said: “We want to congratulate Laurence on his victory. He won clearly and it was a good and fair campaign. We look forward to working with him.

“The turnout was a lot higher than at the by-election in January. Clearly the arguments from both candidates were regarded with interest by residents.

“We want to thank everyone who came out to vote.”