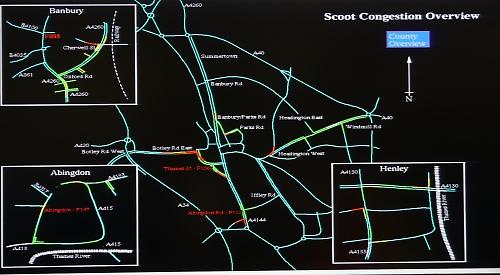 Oxfordshire County Council, the highways authority, has admitted that Scoot is frequently overwhelmed by the volume of vehicles on main roads.

And it says the town’s housebuilding targets should not be increased.

Henley is expected to be asked to find room for another 350 new homes over the next 15 years on top of the 500 that it agreed in 2016 under its joint neighbourhood plan with Harpsden.

But a report to the Henley neighbourhood plan committee on Tuesday revealed that more houses would only make the town’s congestion and air pollution problems worse. Scoot, which is short for Split-Cycle Offset Optimisation Technique, is designed to reduce air pollution in the narrow medieval streets by holding traffic back at the outskirts, allowing it to flow freely in the centre.

It measures how busy the roads are using sensors buried beneath the carriageway then automatically adjusts the timing of the traffic lights, cycling them less frequently during busy periods to allow a greater volume of vehicles through.

This means queues build up at the approaches to the town in Reading Road, White Hill, Thames Side and the crossroads at the foot of Greys Road, which the county council says is better than lots of vehicles idling in the centre.

However, for Scoot to function effectively, there must be enough space for cars to build up on those roads without blocking junctions or peeling off into side streets.

According to figures for Monday and Tuesday, July 9 and 10, which the council says represents two typical weekdays, traffic exceeded this “saturation point” on all main roads during the rush hour.

Reading Road had breached the limit by 7.30am on the Monday and by 9am was more than two-and-a-half times the system’s capacity.

The traffic volume was over the limit by about 4pm on both days, peaking at almost twice the maximum capacity on the Tuesday.

All the other junctions were about 10 to 15 per cent above the limit at times and the northern end of Reading Road, where it meets Duke Street, was nearly at capacity even in the middle of the day.

The committee, which consists of Henley town councillors and volunteers, agreed to present the evidence to South Oxfordshire District Council, the planning authority, as evidence that the town’s housing quota should not increase until the problem is addressed.

The district council is drafting a new local plan which will run until 2033 and is expected to set higher targets across the district as demand for housing is said to have increased.

The committee’s concerns are shared by Bev Hindle, the county council’s deputy director for infrastructure planning.

In an email to the district council’s planning officers, he said: “The amount of growth already included in the neighbourhood plan is considered appropriate.

“There are significant transport infrastructure issues around Henley and there are no proposals for infrastructure improvements which would lead Oxfordshire County Council to consider that additional housing allocations could be made in the area.”

Patrick Fleming, a member of the environmental group Henley in Transition and the committee, said: “The available evidence shows we are completely constrained in our infrastructure to the point where we can’t accept any more houses.

“That will be our gambit as it is supported by the report back from Scoot and the county council’s statements.

“You only need to walk along Greys Road or Reading Road to see there are large queues even at 3pm.

“The traffic blocks various junctions and on Reading Road it spills out beyond Gibbs & Dandy and up the residential side streets as people try to work their way around the queues.

“We’ve got emails from the county council saying there’s no money for investment and nothing you could do anyway.

“In the past you could have knocked down a row of shops to widen the street but no one wants us to look like Birmingham.”

Mr Fleming said solutions could include scheduling deliveries to town centre businesses outside peak hours, banning heavy goods vehicles from using Henley as a “rat run” or supporting a third bridge across the Thames at Caversham Lakes, which Reading Borough Council is proposing.

These could be included in future revisions of the neighbourhood plan.

The committee will also request copies of a transport study commissioned by Shiplake Parish Council when it opposed plans to build 95 homes at Thames Farm, off Reading Road to the north of the village, and ask its own consultant Peter Brett Associates to update its traffic study of three years ago.

This showed about 120 more cars would pass through Henley at peak times if just 450 new homes were built, which was the neighbourhood plan’s original target.

Councillor Ken Arlett, who chairs the committee, said: “We don’t know exactly what our quota will be. We’re working to an assumption of 350 but it would depend on a number of things, including the suitability of any new sites that come forward.

“It’s important to gather traffic data because the figures from developers can’t be relied on. They’ll just study vehicle movements at 10am on one Sunday morning then claim there’s no problem.”

A revised draft of the local plan should be presented to the district council’s cabinet later this month. The authority has said new allocations will only be made where there are not valid planning constraints.