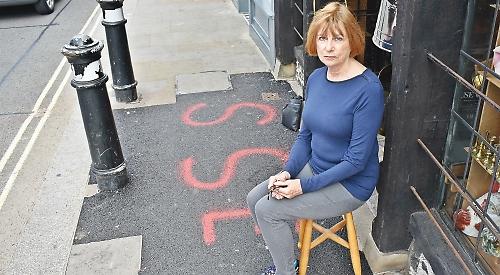 A COUNCILLOR has accused an energy company of “theft” after it failed to replace York stone pavement slabs in Henley.

Joan Bland, who represents the town on South Oxfordshire District Council, criticised Scottish and Southern Energy for using a layer of tarmac instead.

The firm, which had earlier stated this would only be a temporary measure, dug up the stones in front of the Tudor House antiques shop in Duke Street on August 15 in order to fix an underground cable which supplies the business.

The cable had failed a year earlier so SSE installed a temporary one from a nearby junction box while it awaited permission from Oxfordshire County Council, the highways authority, to dig up the street.

It then returned after being chased by David Potter, the shop owner, and finished the job before laying the temporary patch of tarmac, which was later painted with the company’s initials.

The York stones were stacked up against the side of the building, behind the junction box and two temporary plastic barriers, before the company took them away. It says it could not put them straight back as this requires a specialist contractor.

Councillor Bland, who runs the Asquiths teddy bear shop in New Street, has asked the council’s planning officers to order SSE to put them back in place.

About 10 years ago, the two councils paid more than £400,000 to replace the concrete paving in Duke Street, Hart Street, Bell Street and Market Place with York stone following the pedestrianisation of Market Place in 2001.

Cllr Bland, who was then a town councillor, said: “I think it’s actually theft and there is no reason why the utility contractor could not have put those paving stones back straight away. They cost a great deal of money for the taxpayers of Henley and it’s disgraceful that they were just taken off.

“Ten years ago, Oxfordshire County Council helped us to source everything from the same quarry and we had to wait quite a while before we had enough as we wanted it all to match.

“As far as I’m concerned, the utility firm is treating it as a fait accompli.

“You don’t lay tarmac unless you’re planning on leaving it that way but those paving stones are robust and shouldn’t have been damaged when they were being removed so it should be simple to put them back.

“There are lots of access holes in the pavement nearby so I’m not even sure why they needed to dig where they did.

“Many of the old pavements were uneven and dangerous when we installed the York stone and we thought a better material would improve the town aesthetically in the long term while attracting more visitors and footfall.

“We put a lot of work into ensuring everything matched and want to ensure it remains that way.”

A spokeswoman for Scottish and Southern Electricity Networks, part of the SSE Group, said: "The pavement on this side of Duke Street is quite narrow and, as safety is a priority with any works carried out by SSEN, there was a clear need to re-open the pavement and the access to it at the earliest opportunity.

"As a specialist contractor is required to reinstate the York slabs and this can take some time, a smooth and safe walking surface was needed as a temporary measure, hence the use of the tarmac.

"Throughout these works SSEN has liaised with Oxfordshire County Council, which has been sourcing a suitable contractor to deal with the specialist setting and equipment needed to restore the York slabs and the pavement to its original condition.

"SSEN appreciates the history of Henley and its architecture, which is why it is going to such lengths to source the most suitable contractor."