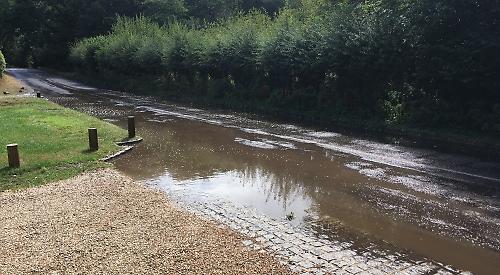 RESIDENTS have launched a campaign to reduce the speed limit on a section of main road in Peppard.

They say that the current 60mph limit on the stretch of Stoke Row Road from Lime Avenue to beyond Neals Lane is unsuitable because visibility is poor and the road is liable to flooding, leading to a number of accidents.

They want the speed limit along the 900m section cut to 30mph, which is what it is at either end.

Matthew Woods, who lives in Stoke Row Road, has written to Oxfordshire County Council, the highways authority, with a petition signed by more than a dozen neighbours and residents of Neals Lane.

He said: “The narrow, short section of road in question is part of a wider village comprising Kingwood/Kingwood Common.

“The village sign when you are travelling from the Stoke Row direction before Neals Lane states ‘please drive slowly’ but there is no change in speed limit.

“This is quite bizarre. Why not change the speed limit here? The same sign denotes entry into Kingwood Common, so one would logically assume that this is the start of the village.”

Mr Woods said there were more than 20 properties along the stretch where the speed limit is currently 60mph and the residents regularly witnessed crashes.

He said: “Cars ending up in hedges is commonplace.

“Certain properties sit right on the road. Their safety is seriously affected by the proximity, number and speed of vehicles travelling along Stoke Row Road.

“The upper 60mph limit encourages speeding along this stretch and into the 30mph zone. A further consideration is the increasing number of vehicles travelling along Stoke Row Road and more generally, of course.

“The area is popular with a number of new developments and properties having been built in recent times.”

Mr Woods said the road flooded in a number of places after heavy rain, making it more hazardous.

“Our neighbour has installed some drainage but it still floods regularly,” he said. “Deer crossing is also a major hazard here due to the proximity of the woods.”

He said that pedestrians, cyclists and horse riders who regularly use the road were also put at risk because there are no street lights, pavements, drainage or road markings on this stretch.

Jeni Wood, who chairs Peppard Parish Council, said she sympathised with the residents but didn’t think their petition would succeed.

She said: “The roads would be safer if it was a 40mph area but I cannot see the county council doing anything because it’s a road where there are no street lights and it’s a very rural area.

“If they did, the speed limit on every rural road in Britain would have to be changed. Road safety issues like the flooding should be reported to the county council.”

Councillor David Bartholomew, who represents the area on the county council, said that unless the council’s road safety officers agreed that the speed limit should be reduced for safety reasons the cost would have to be met by the parish council.

He said: “I will not take any action on speed limit proposals without the endorsement of the parish council as they know their roads best.

“Speed limit proposals are often very divisive and many people change their minds when they realise what it involves.

“This might be signage and street lighting which some feel inappropriate in a rural area.”