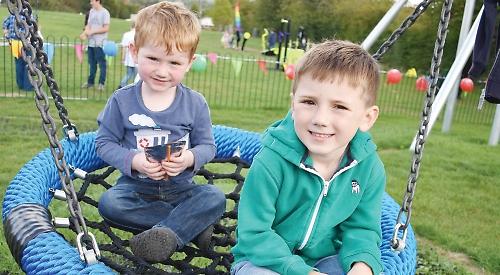 A NEW children’s playground and outdoor gym in Henley have been officially opened.

Dozens of people attended the ceremony and celebrations at Makins recreation ground in Greys Road on Saturday.

The project cost Henley Town Council £80,000 and the installation was carried out by Wicksteed, of Kettering. The work was completed in July and children have been using it since then.

The outdoor gym cost £10,000, which was paid for by the town council and South Oxfordshire District Council.

The equipment includes a pull-up bar, cross-trainer, exercise and hand bikes and leg and chest press machines and was installed by the Great Outdoor Gym Company. The equipment is designed for adults and teenagers. Users will also be able to charge their mobile phones on some of the equipment and create their own energy through exercising.

The celebrations included a children’s fancy dress competition, which was won by Hallie Hinton, eight, and Eden Scivyer, seven, who dressed as a flamenco dancer and an ancient Egyptian respectively. They each won a £10 W H Smith gift voucher.

Singer Israel Onoriode performed and there was a display organised by the Gainsborough Residents Association.

Children all received goodie bags which included sweets and a pencil and sketchbook so they could design their own park. The youngsters flocked to the play equipment, especially the cableway, which can take a weight of up to 19st.

Guests including town councillors tried out the gym equipment.

He said: “It has been quite a long time coming, three years in the making. I thank the town council and all the residents of Gainsborough for their support.

“Thanks also to Wicksteed for providing the equipment and doing an excellent job. It’s a brilliant asset for the town.”

Mr Williams added: “It’s great to see what we designed here is hitting the mark.”

She said: “I’m delighted to be here to open what I hope is the first of many outdoor gyms in Henley. Thank you to the district and town councils for their support.”

Mayor Glen Lambert said: “The thing I like is that they have expanded the area but retained some of the original equipment. My daughter called it nostalgic.

“It’s a much nicer area and the new gym is fantastic. Along with the new skate park, so much investment has gone into Makins and I think it’s going to be a real hub for the town.”

Kellie Hinton, chairwoman of the council’s recreation and amenities committee, said: “The gym and playground are both wonderful facilities and it’s great to be able to launch them together.”