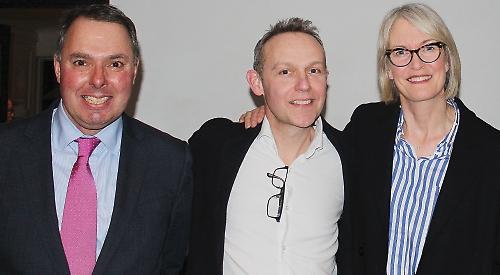 THE new chairman of Henley Conservatives has vowed to work for the good of the town.

Daniel Bausor was speaking after his predecessor Frank Browne was forced out for his “divisive” leadership style.

He said: “We care about Conservative values but Henley is the main focus for all of us.”

Mr Bausor, 49, a marketing consultant who lives in Bix with his wife Jo and daughters Tabitha, 17, and Esther, 14, was elected at a meeting of the branch committee on Friday.

The new branch secretary is Emma Levy, a former climate change lobbyist who lives in Boathouse Reach, Henley. She replaces secretary Karen Grieve, from Peppard Common, who was one of several committee members who resigned in protest at the rebellion against Mr Browne.

Mr Browne, who had been in post for just over a year, resigned following a vote of no confidence at a heated special general meeting on September 3.

He has denied claims that he “over-politicised” issues by encouraging criticism of Henley Town Council’s ruling Henley Residents Group or treated colleagues in an “aggressive, divisive and bullying” fashion.

He says he became unpopular because he wanted to introduce “radical” changes like a selection process for all candidates, including established incumbents, which meant some councillors feared they wouldn’t be re-elected.

Mr Bausor says he wants to double the branch’s membership from 100 to at least 200 over the next 12 months to ensure it better represents people’s views.

He plans to consult residents to come up with new ideas, particularly in the areas of retail, housing and transport.

Mr Bausor said: “I was, of course, aware of the disputes through reading about them in the Henley Standard but would like us to move beyond that.

“I think the people of Henley expect all political parties to treat each other in a respectful way, to listen to each other and work together to deliver improvements.

“I spend a lot of time talking to residents who aren’t actively involved in local politics and they say it really turns them off because they just want to see people getting along and getting things done.

“I want to get the message across about what we’re doing now because our councillors are already doing great things and that isn’t always getting through.

“Emma and I are in a good position because we’ve seen how politics has taken its course in Henley lately and are well aware that residents dislike political bickering.

“There’s no place for point-scoring and we are absolutely committed to dealing with things constructively and positively.”

Mr Bausor was born in Kenilworth, Warwickshire, where his father John ran a butcher’s shop with branches in Coventry and Rugby until he retired in 2003. The business had been in the family since 1881.

He sat a degree in business studies and French at the University of East London then worked in marketing for telecoms and technology firms including Fujitsu, Apple, NEC and Aviya.

He met his wife, who is the Henley Festival’s marketing director, while they were working in Paris and they were married in 1997 before moving to Henley two years later.

Mr Bausor set up his company Famous4 Customer Advocacy in 2008 after seeing how social media sites like Facebook and Twitter were allowing companies to communicate directly with the public.

He says he will use this experience to help the Conservatives increase their following both online and in the physical world.

He says the party has already started doing this through its Henley Matters questionnaire, which was delivered to every household last year, and he hopes to launch similar initiatives in future.

He plans to attract new members by holding informal gatherings like the drinks event with digital industries minister Margot James that he hosted at his home in February.

Mr Bausor said: “In my day job, my specialism is engaging with customers all over the world and that’s something I can bring to the table to make us more collaborative.

“It’s about treating constituents as customers or prospective customers and listening to what they need in whatever medium they prefer, whether online or offline.

“Because I’ve lived in Henley and been involved with the party for a number of years, I’m very excited at the thought of all the things we can achieve. With more members we will have more and better ideas coming forward and I wouldn’t have taken this on if I didn’t think we had a great team to make those improvements.”

Mr Bausor first became involved with the Conservatives in 2010, when he attended the Henley branch’s annual meeting and was enlisted to help the party with its general election campaigning in the marginal constituencies of Stourbridge and Oxford West and Abingdon.

He helped raise funds and deliver leaflets and the party won both seats from Labour and the Lib-Dems respectively.

Mr Bausor was elected to the Henley branch committee about two years later and took part in a number of election and by-election campaigns at town, district and county level.

He said: “I’ve been a Conservative all my life as my father had his own business so I grew up believing in the values of sound economy and I’ve always been passionate about politics, which I studied at A-level.

“I think political views in this country are becoming increasingly polarised so there’s a growing need for people with reasonable opinions who want to ensure every background and level of society is cared for.

“However, to have a sensible foundation for that, you first need to have the money that will enable you to take the steps that need to be taken. Without that, your only choice is to cut your cloth according to what’s available.

“The national economy was in a dreadful state in 2010 and I believed the Conservatives were the best people to manage the situation.

“I was very happy to be part of a successful campaign. I loved meeting people from different backgrounds, finding out their concerns and explaining how the Conservatives could help them to build a better life.

“The two big concerns were economic stability and affordable housing and I felt that was somewhere we could really make a difference.”

Mr Bausor said the Henley branch had “ambitious” aims for next year, when town council elections will take place.

But he added: “After only a few days in post and only one meeting, it would be very wrong of me to announce all kinds of plans when we’re still looking for ideas from residents to help shape our next steps.

“It’s important that what we do next is a reflection of what people want.

“However, there was a very open and collaborative atmosphere at our first meeting and I think it’s fair to say our vision is a lot more ambitious than you might expect.

“The challenges we want to address include infrastructure, building enough new houses and of the right type, including affordable ones, tackling increased traffic on the roads and addressing the retail mix.

“To give a general example, Henley has a great reputation for art and sport and that’s something we’d like to build on.

“We also have to think about the experience of visiting Henley from a shopper or tourist’s perspective and how we can make it really easy for people to get around the town, whether it’s on foot, by bike or parking.

“You do sometimes hear people talking negatively about Henley but we think it’s great already and just want to improve what is already working.

“There’s a sense that some people are interested in local politics but not national or vice-versa but by bringing both together and working more closely with our MP John Howell and our party colleagues at district and county level we can get a lot more ambitious.

“We do have to earn people’s trust and that will take time but I believe it’s starting to happen. We’re really positive about our prospects for next year as there’s a real energy behind us.”

Julian Brookes, the Conservative group leader on the town council, said: “We’re looking for constructive co-operation in the best interests of Henley residents and don’t want to waste a single second on point-scoring because it’s totally frustrating and pointless. We want to draw a line under what has happened in recent weeks.

“Daniel’s best quality is bringing people together and being an expert in listening. He has had 20 years of that in his business career and has also sat on the branch committee for several years so he is very familiar with everyone, including the sitting councillors.”

Mrs Levy said: “I’m delighted with my appointment as I love Henley and look forward to working with Daniel. He’s very much a people person and we will need that.

“We’ve got a lot of work ahead of us and I think the next three months will be crucial for the upcoming elections. We’ve got some very experienced councillors as well as some new faces who bring a completely different perspective to the table so I think it’s exciting.”

Henley MP John Howell said he would work closely with Mr Bausor, adding: “He is a man of great integrity and knows both the town and the party branch well.”