Slow down for the good of all 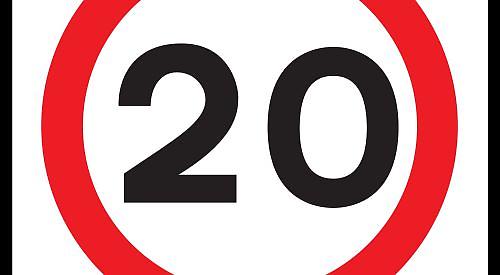 THE speed limit on roads in Henley town centre is to be made 20mph.

The move by the town council is designed to reduce air pollution and make the area more pedestrian-friendly.

It has been approved by Oxfordshire County Council, the highways authority, and is expected to be implemented in November.

The idea was conceived more than 10 years ago and when the formal proposal finally went out to public consultation in the summer 83 per cent of respondents supported it.

The new limit will apply in all the roads in the town centre, including Duke Street, Bell Street, Market Place, New Street, Thames Side, Friday Street, River Side and Station Road, where it is currently 30mph.

It will also cover King’s Road, Hop Gardens, Deanfield Avenue, Gravel Hill and parts of Reading Road, Greys Road and Northfield End as well as some side streets.

The council will spend a total of £18,000 on introducing the scheme, which includes the cost of illuminated signs at the approaches to the restricted area and other signs inside it.

Councillor Stefan Gawrysiak, chairman of the town council’s transport strategy group, said the issue had been a priority since he was elected to the county council in May last year.

He said: “There is an agenda to improve air quality, especially in Duke Street where there are shocking levels of pollution.

“The reduction in the speed limit will help. It will improve the quality of life.

“If we can slow cars down and maybe do some road engineering so the traffic is physically slowed down, then more of the space can be used by pedestrians.”

He hoped that traffic-calming measures and new pedestrian crossing projects would follow over the next few months.

Cllr Gawrysiak said: “These are ideas we are actively working on. There are already planters to help reduce pollution. We are doing work on shared spaces and slowing down traffic to make Henley more people-friendly.”

Councillor Ken Arlett, vice-chairman of the strategy group, said: “We are just following what people are asking us for. They want traffic to go slower.”

Owen Jenkins, director for infrastructure delivery at the county council, said: “Experience in other locations suggests that even relatively modest speed reductions can help reduce the number and severity of accidents but without causing issues with additional emissions and noise.”

Councillor David Nimmo Smith, who represented Henley on the county council from 2005 to 2017, said he had pursued the idea of a lower limit throughout that time.

He said: “The county council has never been against the idea of 20mph in Henley.

“The only thought was it was going to cost money to implement and they did not have much of it.

“The 20mph limit ticks all the boxes and it will make it safer for people walking or cycling around town.”

He said: “Reducing the speed limit is a very important event as it could lead to taking away traffic lights, where you need to have more disciplined drivers.

“Knowing the limit is 20mph and getting people to drive at that speed would allow us to take away the traffic lights and allow for continuous traffic flow.”

He said the lower limit would help reduce air pollution by five to 10 per cent, based on results in other places, and that cars would be 15 to 20 per cent more fuel-efficient.

“I would like to see it rolled out across the whole town and in places like St Andrew’s Road and Harpsden Road,” said Mr Dickie.

“If you have it all over then it helps with discipline and implementing further changes.

“The lower limit does mean we will be able to put more greening in the town and we can reclaim some space.”

Helen Barnett, Henley town and community manager, said: “It can only be a good thing trying to reduce accidents and emissions.

“We are all about making Henley the best place we can and this is going to make it as safe as possible for people.”

Thames Valley Police objected to the 20mph, saying they believed other measures were needed to enforce it in parts of the new zone.

Cllr Gawrysiak said he hoped the zone would be self-enforcing but police would be asked to monitor parts of the area where speeding was known to be a problem.

He said: “The police won’t be hanging around the middle of the town. If we find there are speeding hot spots, for example Gravel Hill, the police will be asked to set up their monitoring equipment. We could repeat the exercise in six months to a year to see if ambient speeds have changed.

“In terms of the air quality this is just the first in a string of measures such as tree planting. We are also working on measures with the district council, which has £500,000 for air quality measures and we are in negotiations to see how much money we are going to get.”

Meanwhile, the speed limit on a section of Fair Mile, from the end of the current 30mph limit at Northfield End to just past the junction with Lambridge Wood Road, is to be reduced from 60mph to 40mph.