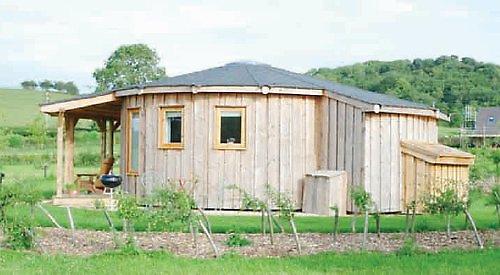 RESIDENTS are fighting plans to create a “glamping” site in woodland between Sonning Common and Peppard.

Emma-Louise Payne wants to have eight “pods” and a barn at the 1.4-hectare site, called Hazel Grove, north of Blounts Court Road.

The pods would be either canvas tents or a timber construction with different designs and linked by a series of raised deck paths to minimise damage to plants or wildlife habitats. The barn would be used as a communal space and as a cookery school.

The site would be open to the public all the time except from mid-January to mid-March and would provide two part-time jobs.

Residents say it would be out of keeping with the area and would have a detrimental effect on flora and fauna.

About 70 people attended a meeting at All Saints’ Church in Peppard last week, which was organised by Matthew Davis, of Church Lane.

He said: “It’s a beautiful, quiet corner of Peppard but it won’t be any more if these plans go ahead.

“At the moment all the traffic using the lane finishes at the church but this would bring it all down into the Chilterns Area of Outstanding Natural Beauty. It seems ridiculous.

“If the landowner really wanted to diversify into glamping, there are probably lots of other places they could put it.”

Hilda and Colin Garnham, of Gravel Hill Crescent, Peppard, said: “This is entirely out of keeping with this quiet part of the AONB and would have a disastrous effect on the resident flora and fauna.

“Access from the car park is some distance from the glamping site down a very narrow lane with no passing places. This would not stop the glampers attempting it.

“The inevitable noise and light pollution would disturb the many animals that reside there.

“The area is used extensively by walkers who enjoy the peace and tranquillity of the countryside, which would be spoilt by this blot on the landscape.

“There is not a good telephone reception or wf-fi signal at the site and in an emergency it would difficult for aid to be summoned or to be able to access it.”

Rob Beeton, of Newfield Road, Sonning Common, said: “Please, please reject this application. It is so unsuited to the AONB. If granted, it would destroy this part of our countryside where many people, including myself, regularly walk and enjoy the tranquillity and unspoilt beauty.

“To ‘urbanise’ this part of Peppard would be a travesty. The access proposal, via Church Lane, is particularly destructive. The lane is totally unsuited to even more traffic, with school traffic already overloading the area.

“In the very sad event that the application is granted, then a condition should be that the access is via the farm entrance in Blounts Court Road and on down an ‘upgraded’ stony lane which leads directly to the site in question.”

Miriam Armstrong of Springwood Lane, Peppard, said: “This would be dangerous for schoolchildren, walkers and those who use this path regularly.

“Should this application be granted it will undoubtedly destroy the current nature of the area. I am strongly opposed to it.”

David and Sylvia Overbury, of Church Lane, Peppard, said: “There would be no evaluation of the character of the glampers during booking and, as the owner would not be resident on the site or anywhere near it, there would be no supervision of glampers’ activities.

“Glamping sites are used for stag and hen parties as well as for corporate events. The glamping season that has been proposed includes Christmas, New Year and also bonfire night. What behaviour can be expected from unvetted and unsupervised glampers on such occasions?

“It is also ominous that the owner of the site has laid the adjacent field to grass, rather than arable crop, for the first time that we can remember in 45 years.

“The attraction of the field to unsupervised glampers to play football and cricket, to light fireworks or for driving their cars across it from the car park will be irresistible.

“An alcohol policy has not been proposed and the applicant is keen for local pubs to be used by the glampers. The possibility of alcohol-fuelled parties, unrestrained by any supervision and taking place without the knowledge of the operator of the site, is a serious possibility.

“This application is effectively proposing a change of use from rural farmland to the equivalent of a holiday park and, if approved, will be an absolute destruction of tranquillity and harmony in this part of the AONB.

“It would also set a dangerous precedent for similar proposals in this rural area where there are numerous farms and areas of woodland.”

In a planning statement, Ms Payne says the proposal is in line with the National Planning Policy Framework, which encourages sustainable growth and expansion of new businesses in rural tourism and leisure.

She said: “The proposal is a well-conceived design comprising modestly scaled and environmentally friendly pods and tents. The proposal would not harm the natural beauty of the AONB and would assimilate into the landscape.

“The proposal would make a significant contribution to the rural economy by increasing visits to rural facilities and other attractions in the area, such as foraging walks, yoga, boot camps, art classes and horse-riding.

“Local business in the adjacent villages, such as public houses, attractions such as Greys Court and the historic town of Henley, all stand to benefit significantly. Access to local pubs will be particularly convenient given the closeness of the footpath network which links the site to both local villages.”

South Oxfordshire District Council, the planning authority, is due to make a decision by February 20.