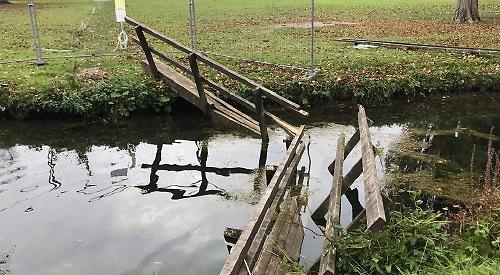 WALKERS have welcomed the re-opening of a public footpath near Henley thanks to the owner of Fawley Court.

The estate has built and installed a new bridge on the closed section of the path which crosses its land on the western bank of the River Thames.

It criticised Buckinghamshire County Council for failing to replace the old bridge, which collapsed in October last year.

But the council responded by saying it had built its own replacement structure.

Following repeated delays and a demonstration by scores of walkers last month, the estate gave the council permission to access the site and offered to pay for a like-for-like replacement, saying the new bridge could be installed before Christmas.

But the council said it would install its own bridge in January.

The estate then responded by paying for the new wooden bridge, which was installed on Friday, as exclusively revealed on the Henley Standard’s website. The occasion was celebrated with a hastily arranged opening ceremony attended by town councillors Will Hamilton and Kellie Hinton and Lady McAlpine, of Fawley Hill.

In a statement, the Fawley Court estate said that it had only learned the council was building a bridge after ordering the construction of its own bridge and it understood that the council’s footpath closure notice that expired on Monday would be extended.

It continued: “Sadly, the council did not communicate this to us despite three recent requests on our part and we knew the bridge was not being built as no drawings had been submitted to us.

“We felt this further extension was totally unreasonable. We simply did not believe that the council would produce anything in the timeframe proposed. With the knowledge of our legal advisors, who confirmed that we are not being obtrusive to the walkers, it is perfectly within our entitlement to build a new bridge. We took immediate action and ordered the construction of a like-for-like bridge on Wednesday lunchtime.

“The bridge was ready for installation by Thursday evening and installed by Friday lunchtime, in other words 48 hours.

“This is how shockingly quickly this matter could have been resolved had we had the co-operation of our council.

“We at Fawley Court have taken responsibility for our own bridge and refuse to continue to wait for the council to fulfil its empty promises. We are only sorry we held faith and believed in them for so long.

“Taking matters into our own hands has now fulfilled the promise to our walkers of a bridge by Christmas. We look forward to welcoming you back once again and for you to enjoy the Thames walk.

“We would like to take this opportunity to wish everyone a festive Christmas and a prosperous New Year.”

The reconstruction of the bridge has been beset by delays, angering walkers who use the path as they have been forced to walk along the busy Marlow Road, which has no pavements, instead.

The council, which is responsible for the narrow bridge, was supposed to install a new structure in June but poor weather put a stop to it.

The work was then pushed back to August to avoid clashing with Henley Royal Regatta but then the council and the Fawley Court estate were unable to organise access to the site.

In November, more than 150 people took part in a demonstration in which they made their way along the footpath to where it was blocked by a wooden barricade.

The “peaceful” demonstration included families with children, regular walkers and countryside campaigners. Some of them carried banners and signs with slogans such as “Bring back our bridge”.

James Lambert, a public relations company owner from Mill End, who helped to organise last month’s protest, called the estate’s action “a great PR stunt” but said he was happy to see a new bridge in place.

He said: “It is a lovely gesture by Fawley Court but the council will have to inspect it and it needs to meet certain criteria. It is the county council’s job to install the new bridge.

“I think it is great that, since the protest, there has been a groundswell of opinion from people who care about this issue.”

Anthea Osborn-Jones, a nordic walking instructor for A Foot in the Chilterns, said: “This is good news because it means the pathway is open again.

“If at a future date the county council wants to put in a bridge then it can.

“It is so dangerous walking along Marlow Road. I know lots of people who do regular walks who have avoided the area but people coming from further afield have been caught out by it.

“Our walkers love that route so it is nice to be able to use it again. It is not only safer but it is more picturesque.”

Gill Heaven, of Henley and Goring Ramblers, said: “I know of at least three walks having to be cancelled or diverted because of this footpath being closed, so we are very pleased.

“The protest must have made a difference.

“Members of our group use this route regularly and it is very popular with people who live in Henley.

“We wouldn’t want to walk along Marlow Road and the alternative, if you want to walk alongside the Thames, is the other side of the river but that is totally different. It is much busier with cyclists and runners.”

He said: “Campaigning is all well and good but when you have to look for someone to blame that is when it gets nasty. Some of the things that have been said have been totally unjust. It is far better to work together.

“Fawley Court has been brilliant — we have been communicating with them since the start of the year to see if we could get something done. We have shared in their frustration. We have now got to a position where we have managed to resolve this by working with Fawley Court in a constructive way.”

Councillor Hinton added: “Demonstrating outside the county council’s offices would have been a far more appropriate course of action.

“They proved they were responsible when they turned down the very generous offer from Fawley Court to fit a replacement bridge.”

Councillor John Halsall, the leader of Wokingham Borough Council, said he was “delighted” to witness the replacement bridge being installed from his home in Remenham Lane.

He said: “I am a jogger and walker and I have a dog. Health and wellbeing is very important to me and to have the ability to go out in the countryside and use public rights of way is absolutely vital.”

However, Kate Ashbrook, general secretary of the Henley-based Open Spaces Society, said: “We deplore the estate’s reported unwillingness to provide reasonable access to the highway authority to deliver and install a new footbridge.

“We are surprised that the estate has waited until now to install a new footbridge, 13 months after the original footbridge had to be closed, when it apparently knew that a replacement footbridge had been commissioned for the site by the county council.

“That is sitting in a council depot awaiting agreement for delivery and installation.  If the estate had co-operated sooner public money would have been saved.”

The county council’s bridge inspector was carrying out an inspection of the new bridge this week.

A council spokesman said it was due to install its own structure next month and this had already been built off site.

He added: “The council made it clear to the landowner’s representative that liability for the replacement structure rested with the council, which had to build it.”

Clive Harriss, deputy cabinet member for planning and environment, said: “At the request of the landowner, we revised our plans to a like-for-like replacement and provided them to the landowner on [Wednesday] December 11 and sought agreement for installation.

“We were happy to accept their offer of help with moving [our] new bridge into position, so it’s a surprise to see a structure installed without prior notice.”

He said the council had been in regular contact with the estate about installing the replacement bridge but was unable to get permission to access the site.

However, the estate said the council’s bridge plans were sent in the evening and not seen until Thursday morning, by which time it had already ordered its own bridge.

It added: “If at some point the council wishes us to remove the new bridge so it can install another replacement, we will be happy to allow this.

“If it happens, we just hope it will be obvious to everyone that the council has spent our public money wisely.”