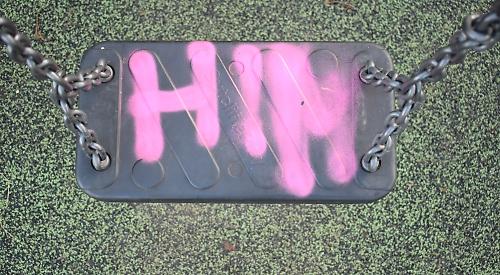 A COUNCILLOR is calling for action after another vandal attack at Freemans Meadow in Henley.

A new set of swings, which was only installed last year, was spray painted in pink with a smiley face and the word “ass”.

The incident, which happened during the night of December 29, was the latest in a series of vandal attacks over recent months and has been reported to police.

A group of teenagers is believed to be responsible.

Because of the time of year, town council staff were unable to remove the graffiti until they returned to work on January 2.

Town councillor Donna Crook visited Freemans Meadow the morning after the incident to take photographs of the swings and says she was verbally abused by a group of teenagers.

She said: “It was very upsetting for me and the lady I was with. Some of the girls were giving us the middle finger. If the parents saw what they were doing they would be horrified. I am sure it is peer pressure. These children would not do any of this if they were on their own but they are just trying to impress their mates.

“Later in the day, I saw the children in Market Place and they started shouting stuff at me but they can be seen on CCTV.

“We have had problems in the past with drug taking and bullying. The park is designed for children up to the age of 12 and most of these children were older than that.”

Councillor Crook says she would support the installation of CCTV in the area to deter further damage.

On the evening of December 18, several newly planted fruit trees at Freemans Meadow were broken or destroyed by vandals.

The damage was discovered by a member of Friends of Freemans Meadow, who also found empty condom packets and dog mess.

Councillor Crook said: “The trees can be replaced but it was a bit upsetting because I planted one of them. It is just reckless vandalism. I am really getting to the end of my patience with these people because they just want to create havoc.

“Maybe we should be taking a stronger approach. We spend lots of time and money on improvements and then we have to find ways of paying for the damage, which puts a strain on council resources.

“The vandals are the ones who should have to pay for it. I know people will say ‘kids will be kids’ but they can have fun without causing damage. If they are going to use it, then they shouldn’t abuse it.

“The parks team do a fantastic job but it means more time is taken out of their day when they have other jobs they should be doing.”

The Friends group is offering a reward for information which leads to a successful prosecution.

A spokeswoman said: “There is a particular group of youths, who gather at Freemans on a regular basis after school and in the school holidays, who are suspected of being responsible for these various acts of vandalism. All information is passed on to the police. It’s such a shame that just a very few badly behaved kids try to spoil things for everyone else.

“We want to encourage all the lovely people of Henley to visit Freemans Meadow on a regular basis with their little children to play in the fantastic new play area and to walk their dogs and make this lovely place their own.”

In August, shards of glass were left on the play equipment at Freemans Meadow just before it was replaced.

The new equipment was unveiled in November and included an accessible roundabout.

In June, vandals removed part of a metal fence at Makins recreation ground and sprayed graffiti at the skate park, including blue swastikas on the grass.

Other incidents have included alcohol being confiscated from youngsters and there have been reports of drug-taking, littering, underage drinking and bullying.