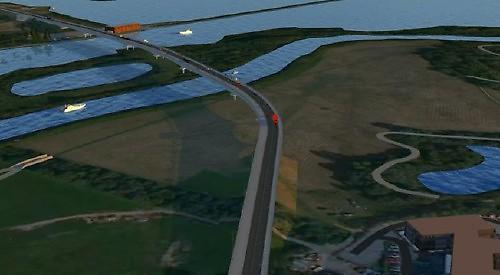 AN entrepreneur and landowner who once drew up plans for a third bridge over the River Thames says it should be built as soon as possible.

David Sherriff, who owns the Thames and Kennet Marina and Redgrave Pinsent Rowing Lake, off Henley Road in Caversham, says the environmental benefits of the
£150 million crossing would outweigh any potential drawbacks.

The plans are being championed by Reading and Wokingham borough councils and computer generated images of the proposed mile-long, two-lane structure were published in last week’s Henley Standard.

This follows the same route as a blueprint commissioned by Mr Sherriff in 2013, spanning Caversham Lakes from the A4155 near the Caversham Park Village turn-off to a new approach road off the roundabout at Thames Valley Park in east Reading.

He said he presented his vision to the Berkshire councils but wasn’t invited to subsequent meetings so was surprised to see how closely their proposal matched his.

Mr Sherriff, from Medmenham, is one of three landowners whose land would be crossed on the northern side, the others being construction firm Tarmac and a private family trust, and he says they all support the idea. He said the bridge would reduce traffic on the B478 through Sonning and the A4155 Henley-Reading road because heavy goods lorries and long-distance drivers would use it to reach the A329(M) and M4 to the south of the river instead of using Sonning, Caversham or Henley bridges.

This should free up capacity for those making local journeys and reduce air pollution because there would be fewer traffic queues.

Mr Sherriff said that Tarmac, which operates the gravel quarry at Sonning Eye, could also build an internal road which would link directly to the bridge so lorries wouldn’t use the A4155.

He said: “Some people are talking a lot of nonsense about this proposal when the benefits could be massive.

“The main thing is that you’d be getting lots of traffic straight on to the M4 and not clogging up smaller streets.”

Mr Sherriff says he would launch a river bus service across the Thames from his marina to the Tesco superstore at King’s Meadow.

The boat, which could carry up to 200 people at a time, would operate in the morning and afternoon. It could also call at the Oracle shopping centre and the Microsoft offices at Thames Valley Park.

He said: “The River Thames is the most significant highway you could ask for and the river bus would serve hundreds of homes in Caversham Park Village.

“At the moment no one can easily drive into town and this would be a good link to both Tesco and people’s workplaces at the Oracle and Microsoft.

“The future is all about getting rid of cars and this would help achieve that so people need to wake up.

“There could be a bigger difference between upstream and downstream journey times when the river flows fast but it would average out the same and the river never freezes so it would be reliable.

“Companies like Tesco would also put huge amounts of money into the river bus scheme — it’s not just some fanciful idea but something that has worked very well in countries all over the world.

“It’s not just a money making operation but something that would benefit the community. If it came down to it, we would donate the land because we believe it’s more important than profiting.”

Mr Sherriff criticised South Oxfordshire District Council and Oxfordshire County Council, which say the scheme fails to consider the impact of traffic on its side of the river.

County councillor David Bartholomew and the district council leader Sue Cooper have argued that the bridge should be for pedestrians, cyclists and public transport due to growing concern about climate change.

Mr Sherriff said: “It would be madness to prevent traffic from using it — there’d be no point.

“They can dream these things but it completely overlooks the public health benefits of keeping everything moving as fast as possible, especially lorries.

“Without this bridge, you’ll have gridlock in Caversham and massive congestion in Henley as well.

“It would be for Oxfordshire’s highways officers to work out exactly how many people are going to travel from south to north.

“People keep talking about it like it’s a major project but it’s fairly simple and doesn’t have to be over-complicated. It should have been built alongside Thames Valley Park when that started 40 years ago.”

The Government is considering an application by Transport for the South-East for £800,000 to fund an outline strategic case for the bridge.