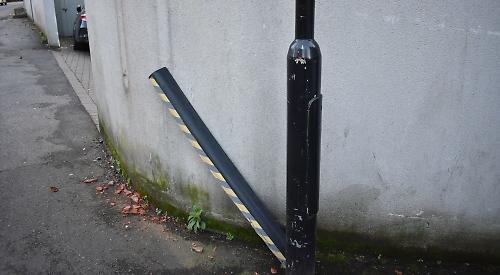 BOLLARDS may be installed outside a Wargrave pub due to delivery lorries repeatedly hitting the wall of a neighbouring house.

Richard Butler, who lives next to the St George & Dragon pub in High Street, has complained to Wargrave Parish Council about the damage to his home.

The pub has apologised and says it is looking into ways to prevent more incidents.

The problem is caused by lorry drivers who park on the pavement in order to make deliveries to the rear entrance of the riverside pub.

They park so close to the wall that they hit it when driving away again. The most recent collision happened on January 3.

Mr Butler, who has lived there for 11 years, has had to spend hundreds of pounds on repairs to the wall.

He said: “The first time it happened was about seven years ago. The damage is done to the wall when they are driving away and they don’t realise they have done it.”

Mr Butler, former honorary secretary of the Wargrave branch of the Royal British Legion, bought brick bollards which he attached to the wall and covered with yellow and black tape.

These have been damaged twice by lorries since they were put up four years ago.

Mr Butler said: “The last time they damaged the protective barriers that I had put up. They damaged the wall and it will need to be repaired again.It is a little bit inconvenient, just as long as someone pays for the damage.

“The last time it took me a year to get the money back from the company that caused the damage.

“As long as you know which company it is, you can usually do something about it.”

He added: “I would like to make it clear that we have received nothing but good support from the pub.

“We have always had a good relationship with them and we have continued to exchange emails.”

Speaking at a council meeting, she said: “Delivery lorries keep running into the wall. The trouble is the lorries park too close to it. When they drive away, the back of the lorry is hitting the wall and this resident wants to know if anything can be done.

“He wants to have bollards introduced so that it would stop vehicles.

“I am surprised the lamp post has not gone down as well, although it has been bent.”

The council is to refer the issue to Wokingham Borough Council, the highways authority.

Parish clerk Stephen Hedges said: “The lorries shouldn’t be parking there in the first place. It is an obstruction of the highway and is therefore an enforcement matter.

“If they are parking there, it means pedestrians are having to walk in the road. We will write to the highways department and send a copy to the manager of the pub.”

The George & Dragon confirmed it was aware of the latest incident.

A spokesman said: “We apologised to our neighbour and covered the cost to repair the damaged wall.

“We understand their frustration and will be discussing potential options with our delivery company about how we can prevent something like this from happening in the future.

“We would also like to openly invite the parish council to share their thoughts with us about potential options with the aim of reaching a mutually beneficial outcome for us and the local community. We really value our position within the local community.”