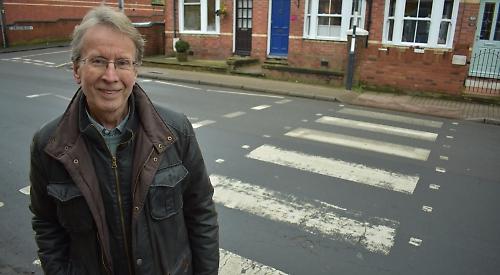 CAMPAIGNERS are calling for the pedestrian crossings in Henley to be improved following two hit and run accidents in less than a week.

They say that people’s lives are being put at risk because the crossing have not been properly maintained and are more dangerous for children to use in the dark in winter.

Harry Graham, 12, was clipped by a car as he used the zebra crossing on the Tesco entry road on the evening of January 10.

He was on his way to football training with AFC Henley at the Jubilee playing fields when his leg was struck by the wheel of a car which did not stop.

Harry was taken to the Royal Berkshire Hospital in Reading and found to have suffered bruising to his shin.

Five days later, Kayleigh Scotland was hit by a car on the crossing in nearby Reading Road and, again, the driver failed to stop.

Miss Scotland, who lives at the YMCA in Lawson Road, Henley, was taken to Townlands Memorial Hospital with bruising to her leg and ankle.

The Henley Standard has found that of the town’s four crossings — the other two are in King’s Road and Marlow Road — only the last is properly marked and not faded.

He said: “Henley itself seems to be suffering with some neglect. It has been getting worse and worse for many years to the point of it being dangerous. There have been patch refurbishments on some areas where white lines have faded but there has not been a very thorough upgrade of the road system really.

“Lines at junctions are faded, left and right turn signs are faded and zebra crossings, two or three, are quite faded. I’ve seen only one is up to scratch.

“If even in daylight people are having accidents on zebra crossings there really is a problem with visibility. I could understand it, up to a point, in the dark but if it’s in the daytime it makes the case even stronger that these things need to be much more visible and much more clearly marked.”

He said bad weather made the problem worse and increased the risk for pedestrians.

He added: “Certainly, outside our ground in the evening, when our kids are training, it is dangerous, especially if it’s bucketing down with rain.”

Mr Howell said Oxfordshire County Council, the highways authority, should “take a hard look” at the problem and agree that action was required.

Harry’s mother Emma said her son had been “extremely lucky” not to have been more seriously hurt.

Mrs Graham, of The Causeway, Caversham, said: “I would definitely say the crossings need improving, especially now there has been a second incident in such a short space of time.

“Drivers need to be a bit more careful but also there need to be more lights so they can be more aware of their surroundings. I just want to get things sorted so it doesn’t happen a third time.”

Donna Thomson, whose son Luca Thomas, 12, also plays for AFC Henley, agreed that Tesco crossing, which is the store’s responsibility, was unsafe.

She said: “It’s only a matter of time before someone is killed. That is why Emma and I will be campaigning for better lighting.

“Some evenings are worse than others when it comes to good visibility and one really can’t see who is coming or going. The street lamp doesn’t seem to shed much light at all. Tesco has a duty of care to get it sorted.

“The club has a membership of over 500, with 100 children training and using the crossing on one evening alone. Then there is also the hockey club and other users of Jubilee playing fields, so with hundreds of children crossing on a daily and weekly basis we need to address the visibility issue immediately.”

Lisa Grant, the manager of the YMCA, said she had used the Reading Road crossing herself and found drivers didn’t look out pedestrians.

“There have been several instances where I’ve been on the crossing and then had to step back because people have just driven past,” she said.

“Some shrug their shoulders and others are just oblivious. It has to be refurbished so you can actually see it but the safest option would be a pelican crossing.”

Councillor Stefan Gawrysiak, Henley’s representative on the county council, said people should drive slowly and with respect on the Tesco entry road.

He said: “There are not only lots of shoppers about but also hundreds of young people crossing the road so it does need to be safe. I will be urging them to repaint the crossing and to look at lighting for it as well. I am sure they will respond.”

Cllr Gawrysiak said he had repported the Reading Road crossing to highways officers since the accident to investigate whether action was needed.

He added: “It’s also about driver behaviour. I’ve driven in both directions towards this crossing and it’s clear it is a zebra crossing — there are poles which are black and white, with flashing yellow lights at the top, so even though the crossing paint work is a little bit faded, it is still a crossing.”

Cllr Gawrysiak said road markings had been improved over the past three years but any more depended on money being available.

A spokesman for Tesco said it maintained its car parks regularly and encouraged all customers to take care when driving around them and to give way to pedestrians.

A county council spokesman said it would repaint the Reading Road crossing within days.