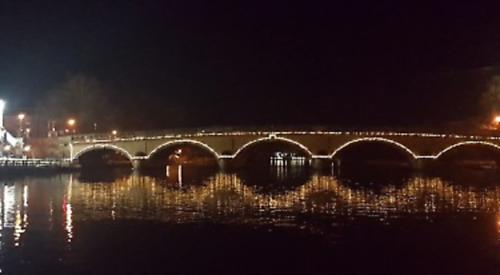 AN artist presented his latest vision to light up Henley Bridge at the town hall on January 29.

Clive Hemsley, who lives in Hart Street, spoke to a crowd of around 60 people and answered questions during a public meeting, chaired by Mayor Ken Arlett.

Mr Hemsley installed LED lights without permission in March 2018 and has since gathered huge public support to fit lights on a permanent basis.

He has said he will fund the project himself, but needs someone with planning expertise to guide him through the process.

Wokingham Borough Council rejected an application last October and Mr Hemsley has since found a new adhesive fixing which won’t damage the stonework of the 18th century crossing.

Many of the people who attended the meeting said Mr Hemsley should be praised for his “generosity” and urged the town council to support the plans.

Others asked if he had considered a project involving floodlights.

Councillor Arlett said the next stage was to submit a planning application to the relevant authorities and only then would the town council be able to provide an opinion.

Mr Hemsley says he has had support from Oxfordshire County Council, the owners of the bridge, and Henley MP John Howell.

In 2018, around 2,500 people signed a petition in favour of keeping the lights he fitted.

For a full story, pick up a copy of next week’s Henley Standard.