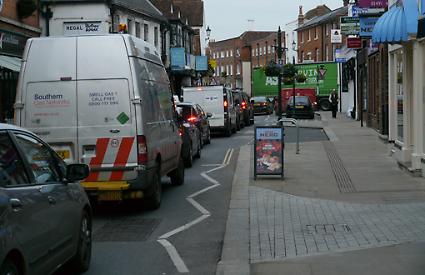 It has produced a report hitting back at claims by South Oxfordshire District Council, which owns the King’s Road car park, that building another level wouldn’t solve the problems.

The town council proposes adding a deck with 68 spaces over the eastern half of the car park at a cost of up to £1.2 million.

It would be built of steel and concrete and could have wooden cladding or even a “living wall” of plants to absorb pollutants from vehicle exhausts. It could also be fitted with solar panels or electric vehicle charging points.

The structure could be built in about three months during which time about half of the 380 existing spaces would remain available.

The council says this would allow about 125,000 additional vehicles a year to park there, bringing in an extra £80,000 annually on top of the existing income of about £400,000. It would pay for itself in 15 years at the current rate of parking charges.

The council says the extra deck would deal with the long-standing complaints that shoppers are put off by the shortage of parking spaces in the town centre and would also reduce the amount of time that drivers spend in queues with their engines idling.

The idea of extending the car park has been on and off the table since 1995 and was recommended in the Henley and Harpsden neighbourhood plan in 2016.

The town council says Henley should be a higher priority than other South Oxfordshire towns because it has no ring road so all traffic passes through the centre. It has fewer bays per person than elsewhere and average occupancy at weekend peaks is 99 per cent, compared with Didcot (82 per cent), Wallingford (76 per cent) and Thame (65 per cent).

The number of overall spaces would fall under Network Rail’s plan to sell part of the station car park for a new hotel.

Town clerk Sheridan Jacklin-Edward, who wrote the report, says King’s Road is the best location because the Greys Road car park has a more complex layout.

He says research shows that people will go elsewhere rather than use public transport when a town restricts car usage, which could particularly discourage tourists with no knowledge of local public transport.

Furthermore, drivers will keep circling for a town centre space rather than looking further out and this exacerbates air pollution. Levels of harmful nitrogen dioxide in parts of Henley have been well above Air Quality England’s minimum safe limit for more than a decade.

Mr Jacklin-Edward says: “Cars are, and will be for a long time, a fact of life, especially for those serving a rural community with little public transport.

“Local authorities cannot fail to cater for them and hope that under-provision of parking will be deterrent enough. Without a viable alternative, drivers will drive longer distances to access free parking and park more inconsiderately in areas with insufficient parking.

“However, vehicle efficiency is improving and carbon emissions reducing. The proposed scheme can help support more sustainable vehicle use and ensure it is as efficient as possible around Henley.”

“Retail faces its most challenging time in history and a lack of available parking is exacerbating this precarious situation.”

In 2016, the district council earmarked £770,000 for the the project in its capital growth budget but a feasibility study concluded it wasn’t suitable and improved signage would be a better solution.

In December, it said it wasn’t willing to work on a business case without evidence that Henley’s need was greater than elsewhere.