Councillors back bridge lights despite opposition 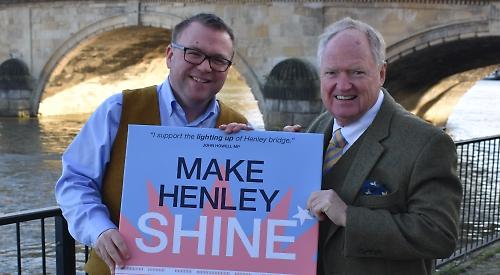 PLANS to install LED lights on Henley Bridge have been branded a “garish” vanity project by a town councillor.

Donna Crook spoke out at a meeting of Henley Town Council’s planning committee, which recommended that the proposal is given the go-ahead.

Clive Hemsley, an entrepreneur and artist, of Hart Street, Henley, and Henley jeweller David Rodger-Sharp have applied to South Oxfordshire District Council and Wokingham Borough Council, the planning authorities on either side of the bridge, for planning permission.

Last year, Mr Hemsley had a similar application turned down by Wokingham council, which said that drilling into the mortar surrounding the five arches of the 18th century, Grade I listed bridge posed “potential harm” to the stonework. It also said there was no evidence that the lights would conserve or enhance the bridge’s architectural value.

In the latest application, Mr Hemsley says he has found a type of adhesive fixing that wouldn’t cause any damage. The lights would be attached with cable ties every metre and fastened with the silicone compound.

John Whiting, speaking on behalf of the Henley Archaeological and Historical Group, told the committee: “The bridge deserves the respect and dignity of its status and doesn’t need to be festooned with strip lights. It is shown on South Oxfordshire District Council’s conservation map along with other listed buildings and having it lit up like a fairground would harm the balance and harmony with its nearby surroundings.

“Continuous strip lighting around the bridge arches and along the parapet would create a significantly different effect to the illegally fixed fairy lights. We note that nothing had been done to remove the previous illegally fixed fairy lights and urge South Oxfordshire District Council or Wokingham Borough Council to prosecute the perpetrators for defacing a Grade I listed building.

“Not enough time and thought has been given to this application both in the means of fixing and long-term effects of this on the bridge. We strongly urge that this application is rejected.”

Councillor Crook said: “My concern is the maintenance will fall on the taxpayer. It’s nonsense honestly. I just think it’s for someone’s ego to say ‘look what I have done’.” Councillor Michelle Thomas said it didn’t matter whether people did or didn’t like the idea of the lights as the application didn’t have enough information to enable the committee to make a judgement.

She questioned whether the fixings would damage the bridge, adding: “The chief bridge highways engineer says it’s completely safe and absolutely acceptable to use. Where is the evidence? Where is this guy’s report?

“There is no independent report of how it would affect the wildlife in the area. Where is the evidence in relation to health and safety?”

Councillor Stefan Gawrysiak said there should be guarantees from Oxfordshire County Council about maintenance and repairs but otherwise he welcomed the application.

He said: “I sort of do have a question about the number of lights but I still support them. As far as the silicone fixing is concerned, the report says that it is an acceptable system.

“I think this is good for Henley. It’s not going to do any harm or damage to the structure of the bridge and I think it does enhance it.”

Councillor Rob Romans said: “I’m happy with it as long as it is done tastefully and the structural integrity of the bridge is maintained and no damage is done.”

Cllr Thomas responded: “I think what I have heard from my fellow councillors is hearsay. The application at best is a work in progress. I do not think it’s there yet.

“Cllr Romans talks about it being done tastefully but taste is for the individual. How can you make a comment on taste? This is planning, it’s not about aesthetics.”

Cllr Gawrysiak replied: “This is all about aesthetics and whether people like it or not and the structural integrity of the bridge.”

Mr Hemsley attached strings of fairy lights to the bridge without permission in March 2018.

This sparked a public debate about the idea of illuminating the structure permanently before Oxfordshire County Council, which owns the bridge, ordered the lights to come down. More than 2,400 people signed a petition calling for the lights to stay but heritage bodies and other people opposed them.

The application says the project would make Henley more of a destination for visitors, increase footfall and contribute to a more ecologically sustainable environment for the river.

The committee agreed by four votes to two to recommend the plans are approved.