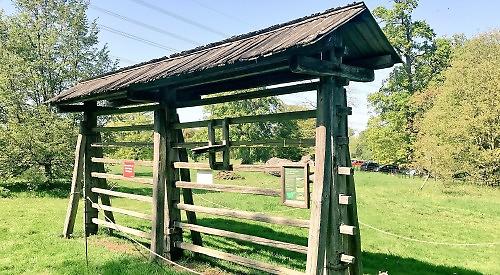 A TRADITIONAL Slovenian hay rack could be installed at Gillotts Corner Field in Henley to mark the town’s twinning relationship with Bled.

The rack, which is known in Slovene as a kozolec and is one of the country’s cultural symbols, currently stands at the University of Oxford’s Harcourt Arboretum, near Nuneham Courtenay, as part of the city’s Pitt Rivers Museum collection.

However, the site is to be redeveloped as a visitor centre so the British-Slovene Society has suggested gifting it to Henley, which twinned with the Slovenian town of Bled almost exactly seven years ago.

It could then be used as a gathering place for the society’s annual picnic for the Slovenian community living in Britain, which typically attracts 40 to 60 people.

Henley Town Council’s recreation and amenities committee has agreed in principle to accept the rack and set aside £500 in its budget to pay for concrete foundations to be laid.

The rack, which is about 25 years old, is made from reconstructed timber and is about 3m tall, 7m long and 1m wide.

It will need to be restored as its condition has deteriorated and the society, which will pay for the relocation, could make it smaller if necessary. The town council’s parks services team considered several possible locations before settling on Gillotts field, a designated town green off Gillotts Lane, as it is far from water so safe from flooding and is a suitably rural setting for a piece of farm equipment.

It could go near a parcel of woodland at the boundary of the site and Henley Wildlife Group has suggested using it for its intended purpose of drying hay.

Mill and Marsh Meadows were considered but ruled out due to the flood risk and the fact that large numbers of visitors pass by, increasing the risk of vandalism.

The chalk bank off Valley Road was considered a suitable setting but the team felt it wasn’t a good meeting place.

Makins recreation ground, off Greys Road, Freemans Meadow, off Fair Mile, and Station Park in Station Road were also considered but all were deemed to be too urbanised.

Marcus Ferrar, of the British-Slovene Society, told the committee: “This is a cultural artefact and a national emblem of Slovenia, much like the British red telephone box.

“I went to Mill Meadows and thought it looked like a nice level location. A wooden hayrack could probably survive flooding there if it was on a concrete base, which is something to think about.”

Councillor Laurence Plant said: “My preference would be Mill or Marsh Meadows as it would look beautiful surrounded by the long grass and lots of people would see it. You’d hope they would behave respectfully.”

But Mayor Ken Arlett said: “If you put it at Mill Meadows, it almost becomes a climbing frame and we’re more concerned about someone being injured than it being damaged.”

Councillor Sarah Miller said: “It probably would be climbed upon or painted so it would need to be in a secure location if it went there.”

The decision to accept the gift will have to be ratified by the full council. If it is accepted, the society has offered to help the Henley-Bled Twinning Association in organising activities.

There are only two Slovenian hayracks in Britain, both donated when the country became independent in 1991.

The other belongs to the Prince of Wales and is on his Highgrove estate in Gloucestershire.