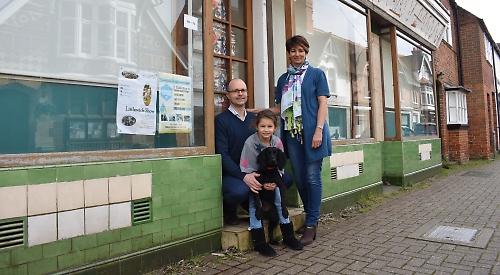 PLANS to turn an empty business unit in Wargrave into a community café have been approved.

Nick and Sarah Hart applied to Wokingham Borough Council to convert the former offices of Quantum Valuations and Talbot & Associates.

The unit has been vacant for about a year and the couple bought it to help regenerate the main street, which has been hit by a series of business closures.

The Harts, who live in the village and have an eight-year-old daughter Izzy, hope to open the H’artisan café by the autumn.

The two flats on the first floor of the two-storey building will not be affected.

Mr Hart, 48, who is also a parish councillor, said: “This has been our dream for a very long time.

“Now the time is right and we can dedicate our time to it.

“We have bought it, so we are not going anywhere — this is a long-term investment in the community.

“The way to put the heart back into the community is to give people a place to go, which is what I have been saying all along. It is great that the borough council is supportive.”

Mrs Hart, 48, a self-employed nutritionist, said: “We are trying to create a community café where everyone is welcome, including children and dogs.

“We want this to put the heart back into the community. It is all about regenerating the high street. It is such a shame because Wargrave is such an amazing community.

“We want to work with other local residents to create a friendly and warm place to come. Customer service will also be a priority.”

The property, which is opposite Woodclyffe Hall, used to be a tea parlour and International Tea Stores in the 1870s. The whole ground floor used to be a shop until 1986 when part of it was converted into a flat. In 1994, planning permission was granted to change the remaining retail space to financial or professional use.

The café will be open from 7am to 7pm on weekdays, 9am to 6pm on Saturdays and 10am to 5pm on Sundays.

The council says deliveries must not take place outside the opening hours, except for Saturdays when the window is 8am to 6pm.

There is also a condition that only re-heated or cold food may be served on the premises.

The Harts plan to make a separate application to install a sign at the front of the building.

“If people come down to the festival in the summer or the recreation ground when there are all kinds of sports going on, they would see it is a vibrant place to live.

“It is a great building being opposite Woodclyffe Hall. We will hopefully get lots of footfall but at the minute there isn’t anywhere for people to go.”

Wargrave Parish Council did not object to the application but asked for appropriate noise mitigation measures to be considered.

This followed concerns raised about the noise impact on people living in the flats.

Caroline Mulcahy, one of the residents, said: “I’m not arguing against the business. I’m sure it would be popular and an asset to the high street and to Wargrave, but I don’t want it to adversely affect the quality of my life or the business to affect the saleability of the flat when the time comes.”

Last year, the Italian restaurant Da Toni closed after less than 12 months, having replaced the Haweli restaurant, which shut in June 2018.

In August Victoria News, a newsagent and post office in Victoria Road, closed and permission was granted for the former Wargrave Antiques shop in High Street to be converted into residential use.