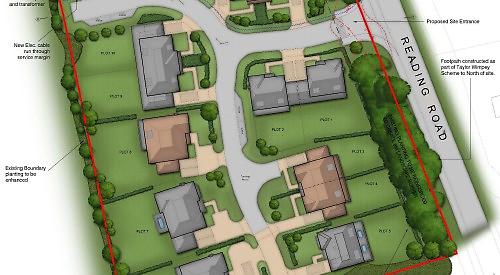 THE village of Shiplake will become a suburb of Henley after being “swamped” by new housing developments, says a councillor.

David Bartholomew was speaking in response to plans for 20 homes on a paddock off the A4155 Reading Road.

If the scheme is approved, it will bring the number of homes due to be built along a short stretch of the busy road to 234, more than seven times the number allocated to the village three years ago.

Councillor Bartholomew, who represents Shiplake on both Oxfordshire county and South Oxfordshire district councils, urged residents to oppose the plans despite having failed to prevent three previous proposals.

He said: “The village is tired of fruitlessly fighting all these applications but I think it has to gather its strength and resist this, otherwise the dominoes will continue to fall and what was once a village will sooner or later become a suburb of Henley.”

Westbourne Homes is to apply for planning permission to build on land just before the junction with Woodlands Road, immediately south of the Thames Farm development, and within the neighbouring Harpsden parish.

The development would comprise a mixture of detatched, semi-detached and terraced houses with one to five bedrooms. Eight would be “affordable” properties in line with planning policy.

The company says the site is not within the Chilterns Area of Outstanding Natural Beauty and has no other special landscape
designations.

The existing trees along the Reading Road boundary would be retained, except for those at the access point.

Charlie Simpson, managing director of Westbourne Homes, said the housing would be “logical infill” because of adjacent properties and the 95 homes currently being built at Thames Farm by Taylor Wimpey.

He said: “The paddock originally had a pleasant semi-rural outlook but this has been undermined by the Taylor Wimpey scheme, which will be clearly visible along the northern boundary and further west.”

Taylor Wimpey won planning permission a year ago after a long battle between the landowner Claire Engbers and villagers, Shiplake Parish Council and South Oxfordshire District Council, the planning authority, that went to the High Court.

Meanwhile, Retirement Villages Group is to build 11 blocks with 50 flats for the elderly plus 15 bungalows on a 2.65-hectare site opposite the Haileywood Farm industrial estate after winning an appeal against a planning inspector’s refusal in September.

Another 40 homes and some commercial units are due to be built at the former Wyevale garden centre, a 1.8-acre site immediately north of Thames Farm, after the Government rejected an appeal by the parish council to intervene.

Councillor Bartholomew said new developments meant Shiplake would increase in size by 35 per cent, undermining its neighbourhood plan, which is designed to protect against speculative development. The draft document is currently out for consultation. When the process began three years ago the village had only 660 houses and was allocated a growth target of five per cent or 33 more homes.

Cllr Bartholomew said: “While the neighbourhood plan is being developed the area is being swamped with multiple applications.The initial object of the plan, which was to find sites for 33 houses, has been massively oversubscribed by a factor of six or seven.

“In terms of what was required of the village, there’s no need for further housing yet developers continue to focus on the area, looking for ways to exploit how one application that has got through creates an opportunity for another one. We’ve got this horrendous domino effect. It seems to make the original intention of the neighbourhood plan completely irrelevant. The original plan was based on a survey completed in 2017 when the circumstances were completely different. At that point, villagers recognised the need for smaller properties and affordable housing and retirement homes. That’s now completely blown out of the water by all the applications that have been submitted.”

Cllr Bartholomew also expressed concern about the impact of traffic coming from the new developments.

He said: “Cumulatively, they will have a big impact on the road network. Apart from the gross urbanisation of Shiplake that’s taking place, in normal times there is horrendous congestion on Reading Road and Duke Street in Henley.

“If you’re travelling from Shiplake through Henley in normal times it can take half an hour to do the one mile from the Tesco roundabout to the crossroads in Market Place during rush hour. I know how desperate people get about that and there has been local amusement about the 20mph limit through Henley as it’s more of a dream target and you’re normally driving at 2 or 3mph.”

Kester George, chairman of Harpsden Parish Council, called the Westbourne Homes proposal “unfortunate” and said it would be opposed by residents.

He said: “In effect it extends the very damaging Thames Farm estate and the last thing we want to do is extend something that is so hopelessly out of character with the parish. People who live in Harpsden don’t want to live next to a busy estate with lots of lighting and noise. It spoils the rural character of a lovely little village set in a delightful parish. That’s not what they bought their houses for. They will look to sell up at a profit and leave for quieter places.”

He echoed Cllr Bartholomew’s concerns about traffic, saying: “It’s bad for Harpsden, Shiplake and Henley because it brings traffic into the sensitive part of Henley — Duke Street and Bell Street.

“It’s pouring traffic into a very unsustainable entrance to the town. Henley just isn’t a place that can take much traffic because it’s so constrained between the river, the AONB and hills around the other side. From a Henley point of view, I would have thought it was bad news.”

Shiplake Parish Council has invited the developer to present the proposals to its planning committee.

Chairman Fred Maroudas said: “It would have the effect of blurring the lines between the existing villages of Shiplake and Harpsden and be one more domino in what we expect — unless we stop it — to be a continuous spread of development from Henley through to Caversham.

“We expect very strong opposition to this development from residents. What covid has shown is that people from both within and outside the village value its natural setting hugely.”

In a letter to villagers, Mr Simpson said the development would help Henley and Harpsden find room for at least 165 more homes required under the district council’s draft local plan and this was better than having to consider other sites in “more sensitive” locations.